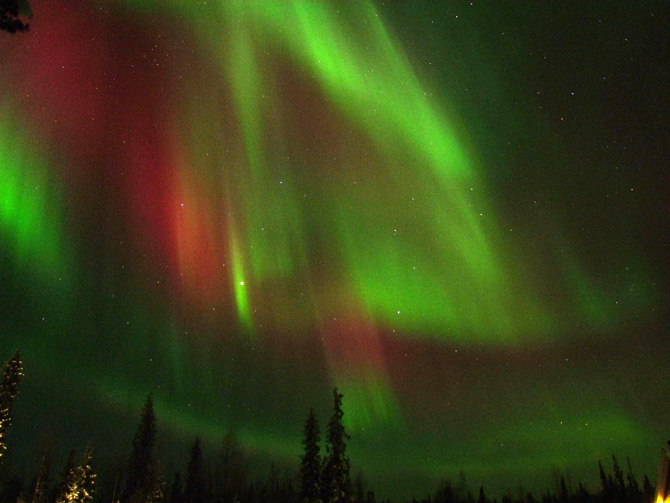 UPDATE 02.27.12: Beautiful High Latitude Aurora Sighted
The weak CME impact on February 26, 2012 did cause some aurora in high latitude locations after a modest start. The above image was captured over Muonio, Finland late last night, a gorgeous ending to a weekend of spectacular solar eruptions and CMEs.


UPDATE 02.26.12: Weak CME Impact
Though the February 24, 2012 solar eruption provided quite a show, the associated coronal mass ejection (CME) that impacted Earth's magnetic field on Feb. 26, 2012 around 4:00pm EST (2100 UT) was weak and does not appear set to cause a strong geomagnetic storm.

From February 23 through February 24 our sun produced an astonishing five solar eruptions, launched from the top, bottom, left and right sides of the solar disk. Four of those eruptions came in just a 24 hour period.

One of the eruptions, a large snaking magnetic filament, erupted during the early hours of February 24, 2012 and launched the first of two coronal mass ejections (CME) in Earth’s direction. Analysis by scientist at the Goddard Space Weather Lab shows that this CME cloud will strike Earth's magnetic field on February 26, 2012 near 8:30am EST (+/- 7 hr). Geomagnetic storms and aurora are possible when the CME arrives.


The filament eruption, as seen in the video above taken by the Solar Dynamic Observatory (SDO) in extreme ultraviolet wavelength, forms a visible split in the sun's atmosphere, where plasma races away in waves in opposite directions. The divide stretches the length of the original filament location, almost 248,500 miles (400,000 km).

Solar filaments are darker, cooler solar material floating above the sun's surface, suspended by magnetic forces. When they appear over the solar limb they are called prominences.


What is a coronal mass ejection?