UPDATE: The particle cloud produced by the Valentines Day event appears to be rather weak and is not expected to produce any strong effects at Earth other than perhaps some beautiful aurora in the high northern and southern latitudes on Feb. 17.

The video clip (above) is of the large X2 flare seen by Solar Dynamics Observatory (SDO) in extreme ultraviolet light on February 15, 2011, has been enlarged and superimposed on a video of SOHO's C2 coronagraph for the same period. This was the largest solar flare since December 5, 2006. The coronagraph images show the faint edge of a "halo" CME as it raced away from the Sun and began heading towards Earth. The video covers about 11 hours.

Looks like the new solar cycle is beginning to ramp up. The sun emitted its first X-class flare in more than four years on February 14 at 8:56 p.m. EST.

X-class flares are the most powerful of all solar events that can trigger radio blackouts and long-lasting radiation storms.

This particular flare comes on the heels of a few M-class and several C-class flares over the past few days. It also has a CME associated with it that is traveling about 900 Km/second and is expected to reach Earth’s orbit on Feb. 16 at about 10 p.m. EST 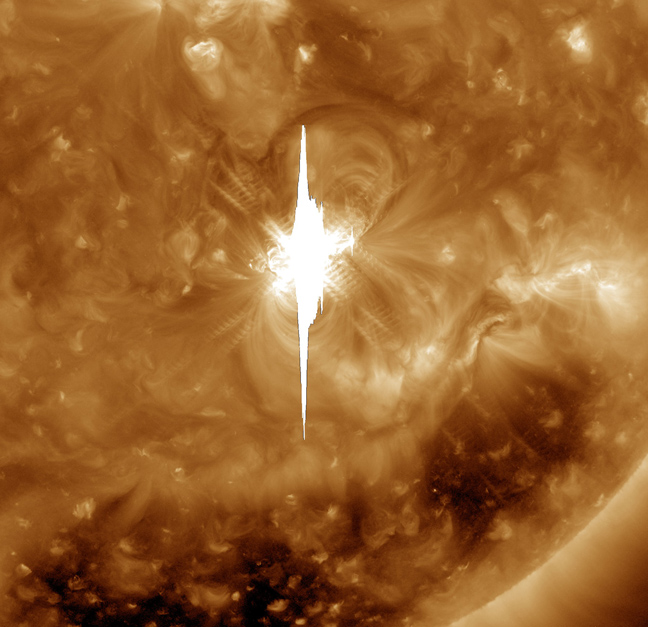 Active region 1158 let loose with an X2.2 flare late on February 15, the largest flare since Dec. 2006 and the biggest flare so far in Solar Cycle 24. Active Region 1158 is in the southern hemisphere, which has been lagging the north in activity but now leads in big flares! Here is a blowup of the flaring region taken by NASA's Solar Dynamics Observatory in the extreme ultraviolet wavelength of 193 Angstroms. Much of the vertical line in the image is caused by the bright flash overwhelming the SDO imager. Credit: NASA/SDO
Susan Hendrix
NASA's Goddard Space Flight Center