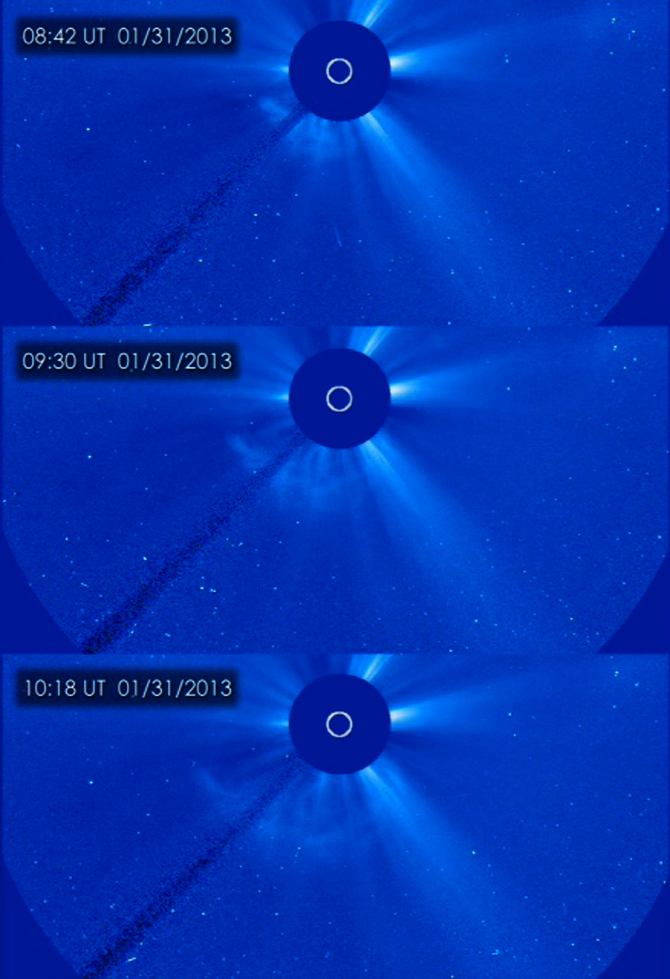 The Solar and Heliospheric Observatory (SOHO) captured these image of a coronal mass ejection (CME), erupting on the left side of the sun early in the morning of Jan 31, 2013, as it was moving away from the sun into space. These images from SOHO are called coronagraphs, in which the bright light of the sun is blocked in order to make the dimmer structures in the sun's atmosphere, or corona, visible. Credit: ESA&NASA/SOHO
› View unlabeled version

On Jan. 31, 2013 at 2:09am EST, the sun erupted with an Earth-directed coronal mass ejection or CME. Experimental NASA research models, based on observations from the Solar Terrestrial Relations Observatory (STEREO) and ESA/NASA’s Solar and Heliospheric Observatory, show that the CME left the sun at speeds of around 575 miles per second, which is a fairly typical speed for CMEs. Historically, CMEs at this speed are mild.

Earth-directed CMEs can cause a space weather phenomenon called a geomagnetic storm, which occurs when they connect with the outside of the Earth's magnetic envelope, the magnetosphere, for an extended period of time. In the past, CME's such as this have caused auroras near the poles but didn't disrupt electrical systems on Earth or interfere with GPS or satellite-based communications systems.


What is a CME?
For answers to this and other space weather questions, please visit the Spaceweather Frequently Asked Questions page.

To view past solar events, visit the Solar Event Archive.