› View full image
This triptych shows a coronal mass ejection or CME as it burst off of the sun in the morning of Jan. 13, 2013. The images were captured by NASA's Solar Terrestrial Relations Observatory (STEREO). Credit: NASA/STEREO
On Jan. 13, 2013, at 2:24 a.m. EST, the sun erupted with an Earth-directed coronal mass ejection or CME. Not to be confused with a solar flare, a CME is a solar phenomenon that can send solar particles into space and reach Earth one to three days later. 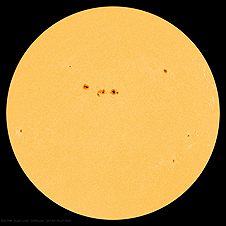 › View larger
This image from NASA's Solar Dynamics Observatory was captured on Jan. 13, 2013, at 8:13 p.m. EST. At the center sits a large cluster of sunspots, dubbed Active Region 11654, that rotated over the left limb of the sun on Jan. 10. The region has been responsible for a spate of mild space weather and is now about 120,000 miles end-to-end, which equates to around 14 Earths. Credit: NASA/SDO/HMI Experimental NASA research models, based on observations from the Solar Terrestrial Relations Observatory (STEREO) and the ESA/NASA mission the Solar and Heliospheric Observatory, show that the CME left the sun at speeds of 275 miles per second. This is a fairly typical speed for CMEs, though much slower than the fastest ones, which can be almost ten times that speed.

When Earth-directed, CMEs can cause a space weather phenomenon called a geomagnetic storm, which occurs when they successfully connect up with the outside of the Earth's magnetic envelope, the magnetosphere, for an extended period of time. In the past, CMEs of this speed have not caused substantial geomagnetic storms. They have caused auroras near the poles but are unlikely to affect electrical systems on Earth or interfere with GPS or satellite-based communications systems.

Two active regions -- named AR 11652 and AR 11654 by the National Oceanic and Atmospheric Administration (NOAA) – have produced four low-level M-class flares since Jan. 11. Solar flares are powerful bursts of light and radiation. Harmful radiation from a flare cannot pass through Earth's atmosphere to physically affect humans on the ground, however, when intense enough, they can disturb the atmosphere in the layer where GPS and communications signals travel. M-class flares are the weakest flares that can still cause some space weather effects near Earth. The recent flares caused weak radio blackouts and their effects have already subsided.

What is a CME?
For answers to this and other space weather questions, please visit the Spaceweather Frequently Asked Questions page.