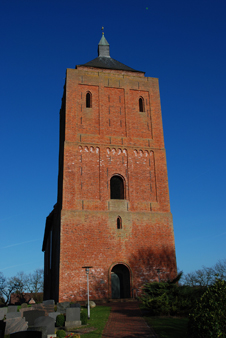 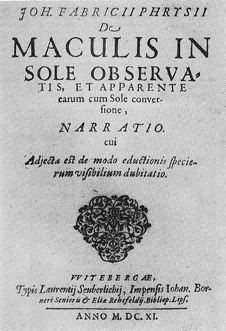 › View larger
Johannes Fabricius published the first scientific manuscript, titled De Maculis in Sole observatis et Apparente earum cum Sole Conversione Narratio (Narration on Spots Observed on the Sun and their Apparent Rotation with the Sun), on sunspots in June 1611. In March of 1611, a German medical student named Johannes Fabricius left school at Leiden in Holland carrying several of the new-fangled telescopes that were beginning to appear in the Netherlands. He was off to visit his father – the well-known astronomer and astrologer David Fabricius who had had a heralded career working with Europe's celebrity astronomers, Tycho Brahe and Johannes Kepler.

In 1611, David Fabricius lived in Osteel, a town in the northwest part of Germany where, in addition to his celestial studies, he was a Protestant preacher. Once in Osteel, Johannes Fabricius hauled out his telescopes for his father, and on March 9 he began to observe the sun.

To their surprise, Johannes spotted black spots on the sun's surface. Sunspots had been seen before: the Chinese had records of them, and indeed England's Thomas Harriot saw them through telescopes in December of 1610. But having seen them 400 years ago this March, Johannes Fabricius was the first to publish a scientific treatise on the subject several months later. This publication opened a door to four more centuries of solar research -- from proving to contemporary unbelievers that the sun rotated to modern attempts to understand what causes the 11-year sunspot cycle.

"At the time, people believed the sun was an inviolate, unchanging, perfect body," says solar physicist Keith Strong who studies sunspots at NASA's Goddard Space Flight Center in Greenbelt, Md. "What people like Fabricius and Galileo did was show that these spots traveled around the surface and that the sun rotated."

In the 17th century Christian-dominated West, it was believed not only that Earth stood at the center of the universe, but also that astronomical bodies were perfect spheres, traveling in perfect circles with unchanging, perfect surfaces. Accepting variation in an astronomical body like the sun seemed a direct attack on the wonder of God's universe.

Indeed, when Johannes Fabricius showed the spots to his father on March 9, 1611, it's likely there was a fair amount of arguing, says Hermann Korte, a writer and retired professor of sociology at the University of Hamburg, Germany, who has extensively researched and written about the Fabricius family for his new book David und Johannes Fabricius und der Roman meines Vaters (David and Johannes Fabricius and My Father's Novel).

"There were probably heavy arguments about seeing these sunspots," says Korte. "Galileo had just spotted the moons around Jupiter in 1610, and this was already a sin for father Fabricius who believed that everything went around Earth and not other planets. So he was probably very suspicious about what his son did."

What his son did was track how these odd blights moved across the sun's surface. Since one could only look at the sun through a telescope during the less bright hours at sunrise and sunset, Johannes Fabricius used a technique that some may recognize as a low-tech way to watch an eclipse. Allow the sun's rays to enter a dark room through a pinhole opening, and watch the resulting image on a sheet of paper. Thus, he could systematically track and review the sunspot movement.

"Several weeks of observations suggested that neither clouds nor planets nor stars caused the dark spots on the sun," says Korte. Johannes Fabricius saw that the spots were a phenomenon of the sun itself, and that they moved in the same direction at a fairly constant speed, disappearing off one edge and reappearing approximately two weeks later on the other. This was a substantial suggestion that the sun was rotating, just as several contemporary scholars claimed.

Several other Westerners found the sunspots independently at the same time. Galileo and the German Jesuit Christoph Scheiner each saw them in 1611, and vied bitterly in their lifetimes over who deserved the credit for discovering them. Thomas Harriot, of course, was very likely the first person to see sunspots through a telescope in December 1610. But Johannes Fabricius is certainly the first person in the West to publish anything on the subject. With so many sightings, it took only a generation for most Europeans to accept that the sun did in fact move and change, and did lie at the center of the solar system.

Sunspots helped overturn outmoded ideas of an Earth-centric system, but just what those sunspots were took a little longer to identify. In the early 1800s, researchers such as Heinrich Schwabe and Rudolf Wolf studied the cycle of sunspots and noted that their numbers waxed and waned over the course of approximately an 11-year cycle.

Since this sunspot cycle correlated to the increase and decrease of geomagnetic storms on Earth, some scholars suggested the sun might be an intensely strong magnet. England's Lord Kelvin, however, incorrectly dismissed this idea at the end of the 19th century. In November of 1892, he noted that the amount of energy needed to create such a geomagnetic storm as the one earlier that year on February 13 was so vast that in a mere eight hours, the work done by the sun would be as much as normally done in four months due to "normal" heat and light output. Kelvin thought this impossible and so he addressed the Royal Society in November of 1892 saying: "It seems as if we may also be forced to conclude that the supposed connection between magnetic storms and sunspots is unreal, and that the seeming agreement between the periods has been mere coincidence."

Kelvin was not correct, however. In 1908, George Ellery Hale photographed the Zeeman effect (a technique that can show the presence of a magnetic field) from a sunspot spectrum and showed that the sunspots were indeed a magnetic phenomenon. Far from solving the question of what the sunspots were, however, this was the beginning of even more solar investigation.

Since sunspots are often the source of some of the greatest eruptions -- massive solar flares with enough energy to power the entire United States for a million years -- and space weather, researchers wish to understand them in as much detail as possible. Today we know that sunspots, and their 11-year cycle, are a manifestation of the complex, rotating magnetic material inside the sun. There are several theories that attempt to model just how that material moves and causes these magnetic burps to well up to the sun's surface, but we still don't know the exact process.

"We can't yet predict the fundamental changes," says Goddard's Strong. "And successful predictions are necessary before we can claim we have any kind of scientific understanding. So, we know we're still missing something."

Johannes Fabricius unfortunately died in 1616 at the young age of 29, so he barely saw even the early stages of sun research. But four centuries after his sighting, the legacy of the sunspot mystery he discovered lives on.