Multimedia Files in Support of the Missing Sunspot Briefing 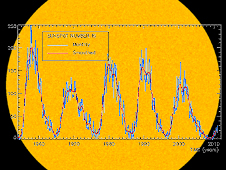 › View Larger
Plot of monthly sunspot numbers, for the present cycle and the four latest cycles, superimposed over an image of the Sun taken by the Solar and Heliospheric Observatory during the minimum of solar cycle 23, showing a spotless Sun. Credit: NASA/SOHO/Solar Influences Data Analysis Center, Belgium › Link to Press Release
› Link to Simulation Videos
› Link to Feature Story

NASA sponsored research has resulted in the first computer model developed to explain the recent period of decreased solar activity during the sun's 11-year cycle. The recent solar minimum, a period characterized by a lower frequency of sunspots and solar storms, was the deepest observed in almost 100 years.

Solar scientists around the world were puzzled by the extended disappearance of sunspots in 2008-2009. Results published in the March 3, 2011 edition of Nature indicate the mystery may be solved. The sun’s magnetic field weakened during this deep solar minimum allowing cosmic rays to penetrate the solar system in record numbers making space a more dangerous place to travel. At the same time, the decrease in EUV and UV radiation caused the cooling and collapse of Earth’s upper atmosphere. As a consequence space debris stopped decaying and started accumulating in Earth orbit due to decreased atmospheric drag. These effects demonstrate the importance of understanding the entire solar cycle from minimum to maximum.