Australian Radio Features STEREO Mission
Ray Gard is producing a series of radio reports following the build-up and launch of the STEREO mission - some of which have been broadcast on the Australian Broadcasting Corporation (ABC Radio) in Western Australia. Check back frequently as we post the newest reports. (The files are large and may work better if downloaded.) 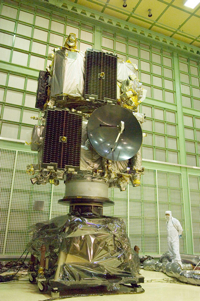 The orbit of a satellite; What is it? How do you calculate it, and what does the moon have to do with not only one but also the orbits of two satellites?

The Solar Terrestrial Relations Observatory (STEREO) mission consists of two near-identical spacecraft that will be sent on a voyage around the Sun. They examine and look at the space weather caused by coronal mass ejections from the sun. It is the radiation from these ejections that causes communication failures, power outages and can play havoc with the polar routes of airlines here on Earth.

This piece further expands our view of the STEREO spacecraft, which are part of NASA's Solar Terrestrial Probes program, and delves more extensively into the unique orbits that were designed for them.


In order to leave the Earth’s gravitational effect you need speed, and lots of it. From a standing start to over 23,000 miles an hour, NASA’s two STEREO spacecraft will be riding a Boeing-made, Delta II rocket in order to get into orbit.

Currently, the STEREO spacecraft are going through final testing and integration with the rocket at the Kennedy Space Flight Center in Florida. In late July the Delta II rocket will make its way skyward and send STEREO on its mission to view the sun in 3-D. It will be the analysis of this 3-D viewing that scientists hope will enable them to better predict the sun's coronal mass ejections, whose solar radiation affect our communications and power grids.

Listen in, as we attempt to explain some of the intricacies of the rocket and the subsequent burning sequence to get our two spacecraft started on their journey to the stars.


Building one spacecraft, let alone two, takes patience, skill and above all else, passion. It is this passion that drives individuals to constant innovative creation - to build an instrument that will head for the stars, and to get it right. The men and women who have worked on STEREO have brought this passion with them.

Prior to being interviewed, the interviewee is asked the same questions:
What do you do?
How long have you been doing it?
Why do you do it?
What is your most memorable experience?
If you could reach out to an individual who was interest in getting into your career, what would you recommend they do?

In putting this series together their answers have amazed me, hopefully their passion will amaze you too.