Sickening Solar Flares
When the biggest solar proton storm in 15 years erupted in January, many were left wondering: what would have happened if astronauts were on the moon?

NASA's new plans include returning to the moon -- not just with robots, but with people too. In the decades ahead we can expect to see habitats, greenhouses and power stations up there. Astronauts will be out among the moondust and craters, exploring, prospecting and building.

On that day, a giant sunspot named "NOAA 720" exploded. The blast sparked an X-class solar flare, the most powerful kind, and hurled a billion-ton cloud of electrified gas (a coronal mass ejection, or CME) into space. Solar protons accelerated to nearly light speed by the explosion reached the Earth-moon system minutes after the flare; it was the beginning of a days-long "proton storm."

Proton storms cause all kinds of problems. They interfere with ham radio communications. They zap satellites, causing short circuits and computer reboots. Worst of all, they can penetrate the skin of space suits and make astronauts feel sick.

January 2005 was a stormy month in space. With little warning, a giant spot materialized on the sun and started exploding. From Jan. 15 through Jan. 19, sunspot 720 produced four powerful solar flares. When it exploded a fifth time on Jan. 20, onlookers were not surprised.

The sun-lit side of the moon is totally exposed to solar flares. It has no atmosphere or magnetic field to deflect radiation. Protons rushing at the moon simply hit the ground or whoever might be walking around outside. An astronaut on the moon, caught outdoors on Jan. 20, would have had almost no time to dash for shelter, and would have become sick. At first, he'd feel fine, but a few days later, symptoms of radiation sickness would appear: vomiting, fatigue, low blood counts. These symptoms might persist for days.

When the Solar Terrestrial Relations Observatory (STEREO) launches in Summer 2006, scientists expect to gain a better understanding of these events and improve warning time. The two STEREO spacecraft will image the sun and CMEs in 3-D for the first time ever to give scientists a better and more complete view of these events. In fact, our current two-dimensional view even makes it hard to predict which direction the events are heading in! 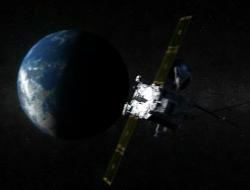 Image right: Animated view of the STEREO spacecraft in their respective orbits ahead of and behind Earth. Click on image for movie or view additional multimedia. Credit: JHU/APL

STEREO's task is to learn more about what triggers these storms, how they move through the solar system, and what makes them tick. In particular, it will take a hard look at how and where these proton storms are triggered and how the solar activity that causes them builds up in the sun's atmosphere before exploding out into space.

This January storm came fast and "hard," with proton energies exceeding 100 million electron volts. These are the kind of high-energy particles that can do damage to human cells and tissue.

Here on Earth, however, no one suffered. Our planet's thick atmosphere and magnetic field protects us from protons and other forms of solar radiation. In fact, the storm was good. When the plodding CME arrived 36 hours after the initial blast and hit Earth's magnetic field, sky watchers in Europe saw the brightest auroras in years.

According to space weather theory - soon to be revised - this is how a proton storm develops:

It begins with an explosion, usually above a sunspot. Sunspots are places where strong magnetic fields poke through the surface of the sun. For reasons no one completely understands, these fields can become unstable and explode, unleashing as much energy as 10 billion hydrogen bombs.

From Earth we see a flash of light and X-rays. This is the "solar flare," and it's the first sign that an explosion has occurred. Light from the flare reaches Earth in only 8 minutes. High energy protons can follow in another ten to twenty minutes, although sometimes they take longer.

Image right: The January 20 proton storm as seen from space by the Solar and Heliospheric Observatory (SOHO). The many speckles are solar protons striking the spacecraft's digital camera. Credit: NASA/ESA.

The Jan. 20 proton storm was by some measures the biggest since 1989. It was particularly rich in high-speed protons packing more than 100 million electron volts (100 MeV) of energy. Such protons can burrow through 11 centimeters of water. A thin-skinned spacesuit would have offered little resistance.

Astronauts on the International Space Station (ISS), however, were safe. The ISS is heavily shielded, plus the station orbits Earth inside our planet's protective magnetic field. "The crew probably absorbed no more than 1 rem," said Francis Cucinotta, NASA's radiation health officer at the Johnson Space Center.

One rem, short for Roentgen Equivalent Man, is the radiation dose that causes the same injury to human tissue as 1 roentgen of x-rays. A typical diagnostic CAT scan, the kind you might get to check for tumors, delivers about 1 rem. So for the crew of the ISS, the Jan. 20 proton storm was no worse than a trip to the doctor on Earth.

On the moon, Cucinotta estimates, an astronaut protected by no more than a space suit would have absorbed about 50 rem of ionizing radiation. That's enough to cause radiation sickness. "But it would not have been fatal," he adds.

To die, you'd need to suddenly absorb 300 rem or more.

The key word is suddenly. You can get 300 rem spread out over a number of days or weeks with little effect. Spreading the dose gives the body time to repair and replace its own damaged cells. But if that 300 rem comes all at once, "we estimate that 50 percent of people exposed would die within 60 days without medical care," said Cucinotta. 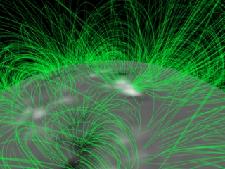 Image left: The sun is a mess of tangled magnetic fields that have the potential to snap like a rubber band and hurl dangerous electrified plasma out into space. This view is based on data and envisions what the loops might look like in 3-D. We already have some great views from the TRACE spacecraft. Credit: NASA.

Cucinotta estimates that a moonwalker caught in the August 1972 storm might have absorbed 400 rem. Deadly? "Not necessarily," he says. A quick trip back to Earth for medical care could have saved the hypothetical astronaut's life.

Surely, though, no astronaut is going to walk around on the moon when there's a giant sunspot threatening to explode. "They're going to stay inside their spaceship (or habitat)," according to Cucinotta. An Apollo command module with its aluminum hull would have attenuated the 1972 storm from 400 rem to less than 35 rem at the astronaut's blood-forming organs. That's the difference between needing a bone marrow transplant, or having a headache.

Modern spaceships are even safer. "We measure the shielding of our ships in units of areal density - or grams per centimeter-squared," says Cucinotta. Big numbers, which represent thick hulls, are better.

The hull of an Apollo command module rated 7 to 8 g/cm2. A modern space shuttle has 10 to 11 g/cm2. The hull of the ISS, in its most heavily shielded areas, has 15 g/cm2. Future moon bases will have storm shelters made of polyethelene and aluminum possibly exceeding 20 g/cm2. A typical space suit, meanwhile, has only 0.25 g/cm2, offering little protection. "That's why you want to be indoors when the proton storm hits," said Cucinotta.

But space beckons and NASA has a lot to learn about the sun's hazards, in terms of protecting astronauts and learning how to better shield spaceships, satellites, and other space assets. Upcoming missions like STEREO should go a long way toward those goals.