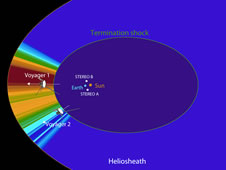 The two STEREO spacecraft were launched in 2006 into Earth's orbit around the sun to obtain stereo pictures of the sun's surface and measure magnetic fields and ion fluxes associated with solar explosions. From June to October 2007, sensors aboard both STEREO spacecraft detected energetic neutral atoms originating from the same spot in the sky, where the sun plunges through the interstellar medium.

Mapping the region by means of neutral, or uncharged, atoms instead of light "heralds a new kind of astronomy using neutral atoms," said Dr. Robert Lin, professor of physics at the University of California, Berkeley and lead for the suprathermal electron sensor aboard the STEREO spacecraft. "You can’t get a global picture of this region, one of the last unexplored regions of the heliosphere, through normal telescopes," Lin said.

The results, reported in the July 3 issue of the journal Nature, clear up a discrepancy in the amount of energy dumped into space by the decelerating solar wind. The solar wind was detected when Voyager 2 entered the heliosheath.

Researchers determined that the newly discovered population of ions in the heliosheath contains about 70 percent of the dissipated energy from the solar wind, exactly the amount unaccounted for by Voyager 2's instruments. The Voyager 2 results also are reported in the July 3 issue of Nature.

The Berkeley team concluded that these energetic neutral atoms were originally ions heated up in the termination shock area that lost their charge to cold atoms in the interstellar medium and, no longer hindered by magnetic fields, flowed back toward the sun and into the sensors aboard STEREO.

"This is the first mapping of energetic neutral particles from the edge of the heliosphere," Lin said. According to Lin, the neutral atoms are probably hydrogen, which comprise most of the particles in the local interstellar medium.

The charge exchange between hot ions and neutral atoms to generate energetic neutral atoms is well known around the sun and planets, including Earth and Jupiter. Spacecraft have used this as a means of remotely measuring the energy in ion plasmas since neutral atoms travel much farther than ions.

NASA plans to launch the Interstellar Boundary Explorer, or IBEX, later this year to more thoroughly map the boundary of the solar system.