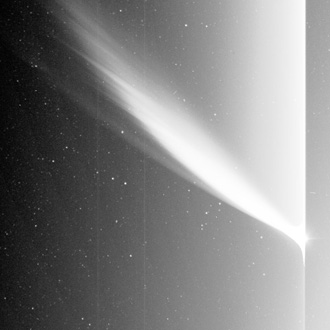 This image of Comet McNaught comes from the Heliospheric Imager on one of the STEREO spacecraft, taken Jan. 11, 2007. To the right is the comet nucleus, so bright it saturates the detector creating a bright vertical band in the image. The comet's dynamic tails extend up and to the left.

The lowest of the tails is the ion tail, which points along the direction of the solar wind. Above that is the comet's dust tail pushed out by radiation pressure from the sun. The tail is highly structured, probably the result of dynamic activity in the comet itself.

Although the two STEREO observatories have been turning on their instruments since mid-December, the Heliospheric Imagers on this spacecraft turned on for the first time on Jan. 11 - just in time to see the spectacular Comet McNaught.