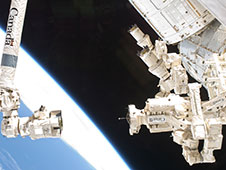 Dextre (right), also known as the Special Purpose Dextrous Manipulator, is a two-armed robot. At left is the Canadarm2. Both components are part of the International Space Station's Mobile Servicing System. Credit: NASA
› View hi-res 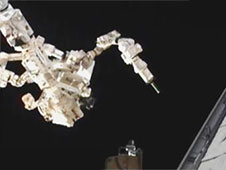 Watch accelerated video from Dextre’s first repair job on the space station in August 2011 when he swapped out a faulty circuit breaker for a fresh one. Credit: NASA TV
› Watch video

Dextre, the Canadian Space Agency’s robotic handyman aboard the International Space Station (ISS), has successfully replaced a faulty circuit-breaker box on the orbiting lab. The robot swapped the failed component for a fresh one, thereby restoring part of the orbiting lab’s backup electrical systems. The maneuver marks the first time Dextre replaces defective equipment on the Station.

"This week's successful replacement of an electrical circuit breaker on the space station's truss is an important operational milestone," said Lead Expedition 28 Flight Director, Ed Van Cise. "In the past, we've only had the option of sending humans outside the station on a spacewalk to perform such repairs. Having a dexterous robot outside the station capable of doing this while controlled from the ground is a big advance in capability that will free up crew time for important research inside the station. Our Flight Control Teams in Houston and in Canada have outdone themselves, and we're looking forward to stretching Dextre's arms on other tasks that will continue to help pave the way for future exploration."

Known by the technical term “Remote Power Control Modules,” (RPCMs) circuit-breaker boxes control the flow of electricity through the ISS’s secondary power distribution system, and tend to fail occasionally. Up to now, exchanging the boxes was done by spacewalkers, which always carries a certain level of risk. Dextre was designed to reduce the need for astronauts to conduct spacewalks for routine maintenance, therefore freeing up the crew’s time for more important activities, like conducting science.

Canadarm2 supported Dextre during the entire operation, which took place on August 28-29. Dextre was operated from the ground by robotics flight controllers at NASA’s Johnson Space Center in Houston, Texas, and supported by several teams of engineers both in Houston and at the Canadian Space Agency’s headquarters in Saint-Hubert, Quebec.

While the robotic handyman remains on-call for duty if any issues arise, Dextre also has a full list of scheduled tasks. Later this week, the Canadian-built robot will relocate two small storage pallets from their current location the robot’s workbench to the Express Logistics Carrier 4 on the ISS. One of the pallets carries the equipment for the Robotic Refueling Mission (RRM), Dextre’s first research and development project to test the technologies and techniques necessary to refuel satellites in flight.