Grow Text SizeShrink Text Size
NASA Space Station Module In Perfect ‘Harmony’ With New Name
Ever since it was designed and built for the International Space Station, it has been known as the Node 2 module. Now thanks to students from across the United States, Node 2 also will be known as Harmony.

The name was chosen from an academic competition involving more than 2,200 students in kindergarten through high school from 32 states. The Node 2 Challenge required students to learn about the space station, build a scale model and write an essay explaining their proposed name for the module that will serve as a central hub for science labs. 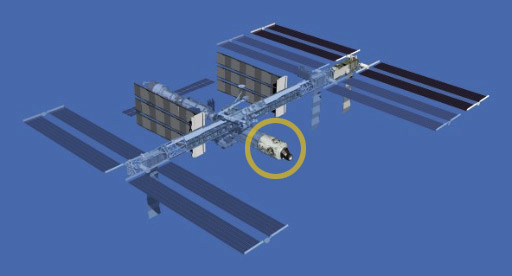 Computer-generated artist's rendering of the International Space Station after the Harmony connecting node (circled in yellow) is relocated from the Unity node port side to the forward port of the Destiny Laboratory. Credit: NASA

Six different schools submitted Harmony. A panel of NASA educators, engineers, scientists and senior agency management selected it because the name symbolizes the spirit of international cooperation embodied by the space station, as well as the specific role played by the module in tying together the international partner modules.

Node 2’s new name was announced Thursday, March 15, 2007, at an event at NASA’s Kennedy Space Center, Fla. Harmony is being prepared at the center for its space shuttle Discovery flight, designated STS-120, which is targeted for launch later this year. Members of the STS-120 crew and managers who are preparing Harmony for launch took part in the naming event.

The winning schools are:

Harmony was built for NASA in Europe. It is 23.6 feet long and 14.5 feet in diameter. The pressurized module will act as an internal connecting port and passageway to additional international science labs and cargo spacecraft. In addition to increasing the living and working space inside the station, it also will serve as a work platform outside for the station's robotic arm.

"This module will allow all international partner pieces of the station to connect together, so it’s really wonderful that kids recognize that harmony is necessary for space cooperation," said Bill Gerstenmaier, associate administrator for Space Operations. 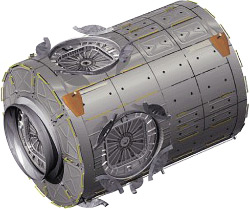 Harmony joins three other named U.S. modules on the station: the Destiny laboratory, the Quest airlock and the Unity node. This is the first U.S. piece of the space station named by someone outside of NASA.

Using space shuttles to finish construction of the International Space Station is a key step in America’s long-term exploration strategy, which includes plans to venture out beyond Earth orbit for purposes of human exploration and scientific discovery. The space station is a crucial test bed for those future exploration missions.
› Back To Top