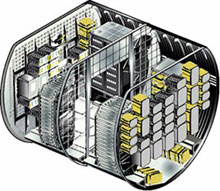 The SPACEHAB double module is a pressurized, mixed-cargo carrier which supports various quantities, sizes, and locations of experiment hardware.

It augments the orbiter middeck by providing a total cargo capacity of up to 4,536 kilograms (10,000 pounds) with the ability to accommodate powered payloads. This double module contains systems necessary to support the habitat for the astronauts, such as ventilation, lighting and limited power. 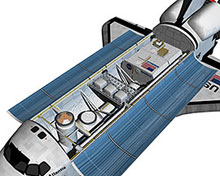 The double module carried internal and resupply cargo for station outfitting. Shortly after the shuttle entered orbit the SPACEHAB was activated for the crewmembers to begin on-orbit experiments.

The crews had a number of duties in the SPACEHAB during the missions, such as activation/deactivation, monitoring and in-flight maintenance of SPACEHAB subsystems. 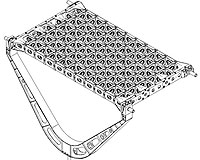