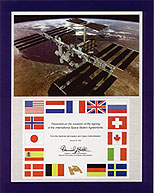 January 29, 1998, marked an important milestone for the International Space Station as senior government officials from 15 countries met in Washington and signed agreements establishing the framework for cooperation among the partners on the design, development, operation and utilization of the Space Station.

Image at right: This commemorative was presented on the occasion of the signing of the International Space Station Agreements. 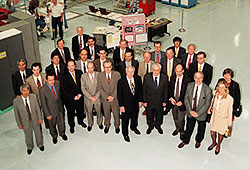