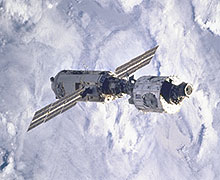 This photo of the International Space Station was taken after the undocking of Space Shuttle Endeavour during STS-88. Image Credit: NASA.

Unity was the first piece of the International Space Station provided by the United States. It was the first of the three connecting nodes (Harmony and Tranquility would become the other two).

After the Russian Zarya module was launched into space atop a Proton rocket on November 20, 1998, Space Shuttle Endeavour launched on December 4, 1998, with the Unity Node and two pressurized mating adapters inside the payload bay. On Dec. 6, 1998, the STS-88 crew captured Zarya and mated it with the Unity Node inside the shuttle's payload bay. These two pieces of the space station had never been in the same hemisphere, but they were mated together perfectly. On Sunday, Dec. 13, Space Shuttle Endeavour undocked from the young International Space Station for the return to Earth.