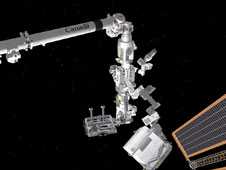 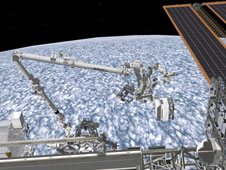 On December 22-23, 2010, Dextre, the Canadian Space Agency’s robotic handyman aboard the International Space Station (ISS), will undertake a series of tasks that will officially certify the robot for duty.

Since launched in 2008, Dextre has completed several rounds of tests as part of its certification process. These steps are essential to test the Dextre’s systems and performance, since the robot could not be assembled and tested in Earth’s gravity.

Dextre will ride on the end of Canadarm2 to the External Logistic Carrier (ELC2) on the starboard side of the ISS. Dextre will then relocate a storage box known as a Cargo Transport Carrier, a generic platform for ISS cargo and payloads, containing ten circuit breaker boxes (remote power control modules). Dextre will begin by picking up the 442-kg cargo transport carrier and placing the box on its workbench. While still riding on the end of Canadarm2, Dextre will install the cargo transport carrier at its new location a short distance away.

The move will create more space in the vicinity for the Alpha Magnetic Spectrometer, scheduled for delivery on STS-134, the final space shuttle flight, in 2011. It will also serve as a dry run for Dextre’s first official task when it will unload the External Pallet from Japan’s HTV-2 spacecraft (a space “moving van” that carries supplies to the ISS) in early February 2011.
› Back To Top