Grow Text SizeShrink Text Size
Jules Verne ATV prepares for le voyage extraordinaire
When author Jules Verne imagined in 1865 the story that would become De la Terre à la Lune (From the Earth to the Moon), he envisioned a rocket that would launch people into space using a giant cannon to escape the Earth’s gravity. 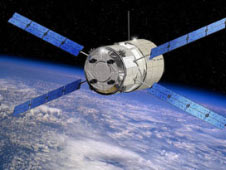 The Jules Verne Automated Transfer Vehicle (ATV) is a 22-ton unmanned cargo carrier that will ferry almost 8 tons of equipment and spare parts as well as food, air, water and Russian resupply fuel to the station. It will use its thrusters to control the attitude of the space station and its main engines to reboost it.

The first ATV launch is set for March 8, 2008, from ESA’s Arianespace launch site in Kourou, French Guiana, along the northern coast of South America. The Jules Verne will ride atop an Ariane 5 rocket, the largest payload ever carried by that rocket.

On board the ATV is a high-precision navigation system that will be used to guide the craft to a rendezvous with the station. The docking with the station will be automatic, with the ATV slowly approaching and mating to the aft port of the station’s Russian Zvezda living quarters module.

“The ATV, with its large cargo capacity as well as its ability to bring fuel, air and water to ISS will be a significant enhancement to the ISS cargo transportation capability," said Kirk Shireman, deputy program manager for the International Space Station. "The ATV, together with the Shuttle, Progress, and Soyuz vehicles, gives the ISS cargo transportation options and redundancy which is important for long term success.” 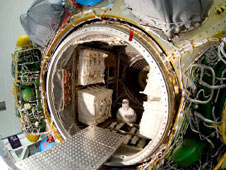 Image above: The "Jules Verne" Automated Transfer Vehicle is loaded with cargo during pre-flight processing. Credit: ESA Before it docks, the ATV will conduct several weeks of systems checks, including two approaches to the station and the initiation of “escape” maneuvers to back away from the complex and circle around. The escape test will verify critical software in the ATV’s computers that would be used to avoid a collision with the station in the event the ATV’s rendezvous system failed.

“The two approach tests will give ESA, NASA and Rocket Space Corp. Energia time to critically examine the performance of ATV’s systems,” said Brian Smith, NASA’s lead ATV flight director. “ATV must pass these tests before it will be allowed to initiate the final rendezvous and docking. The tests have been designed to verify the systems vital to ensuring the safety of the ISS and its crew perform as expected."

The Jules Verne will remain at the station until August. Once the station crew has unloaded it and repacked it with trash, the ATV will undock and begin its final flight into the Earth’s atmosphere, where it will burn up over the Pacific Ocean.

Because the space shuttle Endeavour is scheduled to launch on mission STS-123 shortly after the launch of the ATV, the ATV will be placed in a “parking” orbit around the Earth, about 1,200 miles away from the station, until Endeavour’s mission is completed. The ATV’s final approach and docking with the station is scheduled for early April.