Grow Text SizeShrink Text Size
Columbus Leaves Europe, Heads for America
It may sound like a rewrite of history, but Columbus is leaving Germany and heading to the shores of Florida. This Columbus isn't looking for new lands to explore; it has a final destination in space. As a component of the International Space Station, the Columbus Laboratory's final earthly stop is the Space Station Processing Facility at NASA's Kennedy Space Center in Florida. 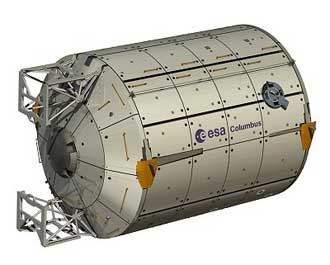 As the European Space Agency's largest single contribution to the space station, the research laboratory module -- with four payload facility racks -- was completed in early May and delivered to the agency in a ceremony in Bremen, Germany. It must be processed in Florida before being ferried to the station within the space shuttle's cargo bay.
+ Learn about processing space station components

Image at Left: The physical design of the Columbus Laboratory module allows it to fit snugly into the cargo bay of the space shuttle for transport to the space station. Image credit: ESA-D. Ducros

The physical design and layout of the Columbus laboratory is not unlike the three multi-purpose logistics modules (MPLM) built by the Italian Space Agency and used for transporting scientific experiments, materials and supplies to the station via the space shuttles.
+ Learn about the MPLM 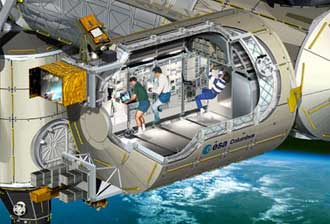 But unlike the visiting logistic modules that return to Earth with the shuttles, Columbus will permanently expand the research facilities of the space station. The laboratory will be connected to the rest of the orbiting outpost by NASA's Node 2 module.
+ View Space Station Configuration Chart

Image at Right: Once installed permanently on the station, crew members can work on experiments in the laboratory's "racks." The Node 2 module will connect Columbus to the U.S. Destiny laboratory and the Japanese Kibo laboratory. Image credit: ESA-D. Ducros

Columbus is about 23 feet long and 15 feet wide, allowing it to hold 10 "racks" of experiments, each approximately the size of a phone booth. Five NASA racks will be added to the laboratory once it is in orbit. Each rack provides independent controls for power and cooling, as well as communication links to earthbound controllers and researchers. These links will allow scientists all over Europe to participate in their own experiments in space from several user centers and, in some cases, even from their own work locations. 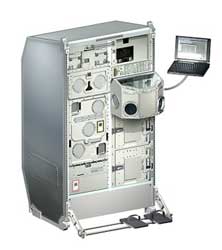 The Columbus laboratory's flexibility provides room for the researchers on the ground, aided by the station's crew, to conduct thousands of experiments in life sciences, materials sciences, fluid physics and other research in a weightless environment not possible on Earth.

Image at Left: This illustration shows Biolab, just one of the experiment payload racks designed to fit into Columbus. Biolab will support experiments on micro-organisms, cells and tissue cultures, and even small plants and insects. Image credit: ESA-D. Ducros

In addition, the station crew can conduct experiments outside the module within the vacuum of space, thanks to four exterior mounting platforms that can accommodate external payloads. With a clear view of Earth and the vastness of space, external experiments can run the gamut from the microscopic world of bacteria to the limitlessness of space. The first two experiment packages will fly to the station on the shuttle with the module.

The control center for the work that will be conducted in the Columbus laboratory is located in Oberpfaffenhofen, Germany. From there, ground controllers can communicate with the module as the space station orbits the Earth, as well as with researchers across Europe and their partners in the United States and Russia. 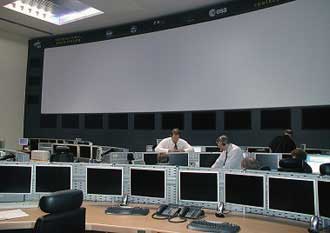 Image at Right: On Earth, the nerve center for the laboratory is the Columbus Control Center in Oberpfaffenhofen, Germany. It serves as the operations center for all the European science to be performed on the International Space Station. Image credit: ESA/DLR

Once the module is in orbit as part of the International Space Station, the Columbus laboratory is expected to provide at least 10 years of science capabilities for researchers, whether they're working at their desks on Earth or floating weightlessly in space.