Grow Text SizeShrink Text Size
How Long Does It Take to Rebuild Bone Lost During Space Flight?
Are bigger bones stronger bones? Not necessarily, according to a recent NASA study that seeks to ensure healthy bones in astronauts. 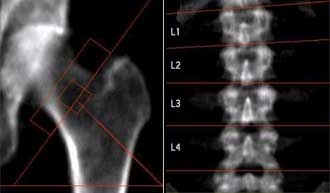 A four-year study of the long-term effects of microgravity on the bones of International Space Station crew members showed that the astronauts, on average, lost roughly 11 percent of their total hip bone mass over the course of their mission.

The study also found that a year after each crew member had returned to Earth, much of their lost bone mass was replaced. However, the bone structure and density had not returned to normal and signs of hip strength had not recovered at one year, although it had increased slightly compared to post-flight levels. Researchers say it could take much longer than a year to regain the lost strength.

The study's findings are important because bone loss during the course of a long transit to Mars and back could result in an increased risk of a bone fracture during activities on the Martian surface, or in the long term, back on Earth during the course of aging years after mission completion. Data from the study showed that, on average, crewmembers lost as much bone mass in one month on orbit as an elderly woman loses in an entire year.

Doctors treat millions of women and men for osteoporosis -- a disease in which the bones atrophy causing loss of density, becoming more porous and breaking more easily. Although healthy astronauts did not develop osteoporosis during their four- to six-month stays on the space station, the levels of bone loss documented were still enough to raise the concern for an increased risk for fracture when astronauts’ skeletons are subjected to applied loads with working, lifting or falling.

"The success of human exploration missions depends on finding countermeasures to overcome such effects on crew members," said Julie Robinson, International Space Station program scientist at NASA's Johnson Space Center in Houston. "There are important synergies between osteoporosis research on Earth, and studies of bone loss and recovery in healthy astronauts in space. Each area of study complements the other."

The research, formally named the Subregional Bone Assessment, was one of the first Human Research Program investigations to be completed onboard the space station. The program manages human health experiments to understand and reduce health and performance risks to astronauts in space.

Beginning with Expedition 2, from March to August 2001, and continuing through Expedition 8, from October 2003 to April 2004, 16 crew members participated in the study. The research focused on their weight bearing bones including the hip bones because studies had shown that the hip experiences the highest amount of bone loss during a space mission and the hip is the site of the most devastating osteoporotic fractures in the elderly.

The astronauts' bones were measured before and after their mission and one year after their return to Earth. The principal investigator for the experiment, Dr. Thomas Lang of the University of California in San Francisco, used X-ray Quantitative Computed Tomography to characterize the recovery of parts of the hip bone and changes in size and strength of the bones. The technique produces a series of cross-sectional images of the hip bone, allowing it to be quantified three-dimensionally without interference from overlying tissues. Lang used the X-ray technology to examine separately the bone's dense outer, or cortical, layer and its spongy inner, or trabecular, layer to determine bone loss in the hip and spine. The three-dimensional tomography measurements allowed researchers to determine whether loss is more prominent in one of those bone subregions.

"There's evidence from studies of aging that bone size increases as a compensation for loss of bone mass. We hypothesized that something similar would occur when crew members were re-introduced to gravity after long-duration spaceflight," said Lang. "Our one-year measurements were consistent with such an increase in bone size; however this increase in the bone may not have been enough to result in full recovery of the hip bone strength. We will continue to measure bone density to determine how much longer it takes to rebuild bone and bone strength, and whether these structural changes are permanent." Contact: