Grow Text SizeShrink Text Size
Smoking Out Space Fires: NASA Study Helps Prevent Fires in Space
If you've ever burned your dinner, you know how startling a smoke alarm can be. Now, imagine you're 220 miles away from Earth in an orbiting lab when the alarm sounds.

Fires are no laughing matter on Earth, but in space they could be even more devastating.

"If a chair is on fire in your home, you have time to get out. In a spacecraft, you don't," said NASA scientist Dr. David Urban. "You have to detect smoke in an early pre-fire state, so you can stop it before it starts." 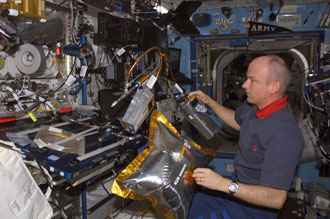 Urban and a team of scientists and engineers at NASA's Glenn Research Center are developing a space station experiment to help engineers design smoke detectors that are sensitive enough to catch fires early, but not so sensitive that they cause false alarms.

This may not sound like a major challenge. After all, household smoke detectors are mass produced and inexpensive. But detecting smoke in space isn't quite so simple.

Smoke detectors work by looking for particles in the air that are about the same size as the particles normally found in smoke. However, a 1996 NASA Glenn study showed that smoke particles in space are bigger than those on Earth.

"Smoke particles form differently in microgravity than they do on the ground," said William Sheredy, project manager for the Smoke Aerosol Measurement Experiment (SAME). "When smoke is created in microgravity, the particles have more time to gather together, producing larger particles or particle chains than in normal gravity."

So far, nobody knows exactly how big those particles are. That's why the NASA Glenn team created SAME. This space station experiment will burn samples of materials normally found in space -- like Teflon, silicon, cellulose and Kapton -- and then measure the size of the particles in the smoke. Engineers will use this information to design the next generation of spacecraft smoke detectors.

As NASA often does, the team used several commercial parts to build the experiment. One of those parts, the P-Trak, was made by Minnesota company TSI. Designed to measure air quality, this small handheld device is capable of counting individual smoke particles. It's also the perfect size and weight for a space station experiment. There's just one catch: It wasn't designed for space. 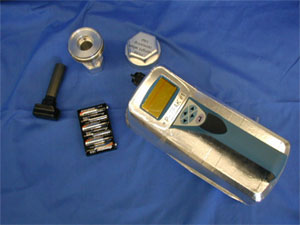 P-Trak works by passing air through a heated chamber of vaporous alcohol. When the air is cooled, the alcohol condenses around dust particles much like water condenses on a cold glass. This makes the particles large enough that an optical sensor can detect them as they scatter light from a laser beam.

"We were concerned because gravity assists in the circulation of the alcohol inside the device," Sheredy said.

"We weren't sure it would work properly in the absence of gravity."

So the scientists modified the device by carving tiny grooves inside its chambers to improve the flow of alcohol in microgravity. Of course, the scientific method requires every theory to be tested, and this experiment was no exception.

Before they could use the device in SAME, the team had to be sure the modification would work. To do so, they created another space station experiment called the Dust and Aerosol Measurement Feasibility Test (DAFT), to test the modified P-Trak.

In September, astronaut and Expedition 13 Flight Engineer Jeff Williams operated DAFT on the station. Urban, Sheredy and other DAFT team members watched in real time as Williams called in the recordings to Payload Communications. The results showed that the commercial particle counter works in space.

"It was really exciting. For people who work on projects like we do, days like this are highlights in our careers," said Sheredy. "From beginning to end, DAFT took about 3.5 years, and it all came down to about six hours of operation."

Those crucial six hours brought the team one step closer to understanding the nature of space smoke and improving NASA's detectors. They look forward to another career highlight next summer when their primary experiment, SAME, is scheduled to travel to the station aboard the space shuttle.