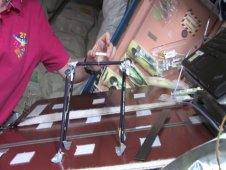 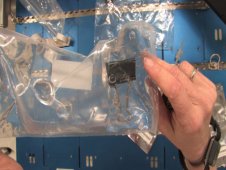 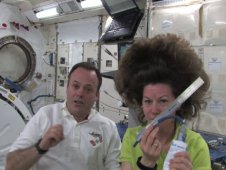 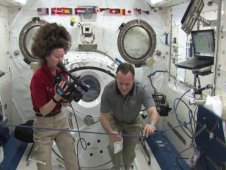 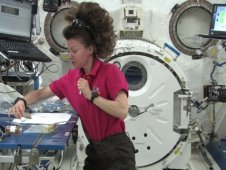 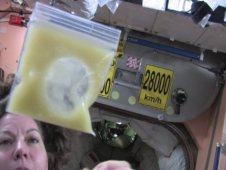 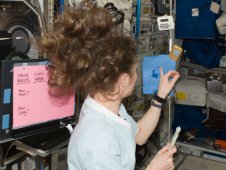 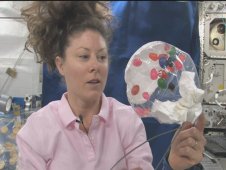 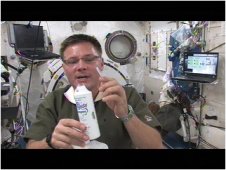 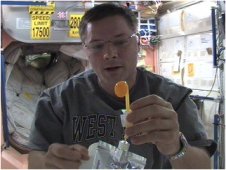 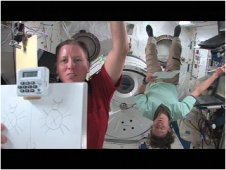 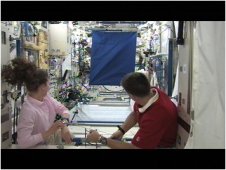 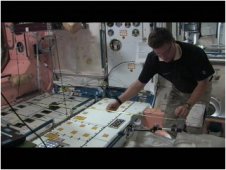 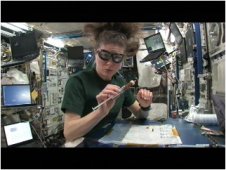 Astronaut Tracy Caldwell-Dyson performs the Water and Hot Sauce experiment from Brownell Middle School in Grosse Pointe Farms, Mich. (NASA) About the Challenge
"Kids in Micro-g" was a student experiment design challenge geared toward grades 5-8 and took place during the school years 2009-2010 and 2010-2011. Its purpose was to give students a hands-on opportunity to design an experiment or simple demonstration that could be performed both in the classroom and by astronauts aboard the International Space Station (ISS).

The winning experiments had observably different results when the experiments were performed by astronauts in the "Micro-g" (or microgravity) environment of the ISS. A microgravity environment is one in which the apparent weight of a system is small compared to its actual weight due to gravity. The apparatus for the demonstration was constructed using materials from a materials tool kit provided to the astronauts on board the ISS. The tool kit consisted of materials commonly found in the classroom and used for science demonstrations.

The experiments were recorded onboard the ISS in HD video and the winners were supplied with copies of their video before the end of their school year.

Results
Following are videos of crewmembers aboard the International Space Station operating some of the winning students' Kids in Micro-g experiments that were selected in the last 2 years. On the right side of this page are still images taken of these same science activities onboard ISS.

Kids in Micro-g Intro with Cady Coleman
Follow astronaut Cady Coleman as she goes on a scavenger hunt on the space station to gather materials for student experiments.

Future Competitions
Please note: NASA will be transitioning the Kids in Micro-g student experiment design challenge to focus on high school students for the 2011-2012 school year. This new student experiment design challenge is currently being developed and established for near-term International Space Station research. Details will be provided soon, so please check back here periodically to see how older students leverage the Kids in Micro-g methodologies. In the meantime, be sure to check out the other NASA educational opportunities and challenges currently available for middle school students (and other grade levels) at: http://www.nasa.gov/offices/education/programs/index.html

Customer Service Helpline
The ISS Payloads Office has both a phone and an email customer service helpline that Payload Developers and others interested in doing research can contact to get assistance. The phone is staffed during regular business hours, or messages may be issued after hours, and a representative will return the call on the next business day.
Phone: 281-244-6187
Email: jsc-iss-payloads-helpline@mail.nasa.gov

Back to Top
› Back To Top