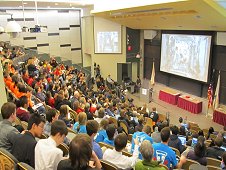 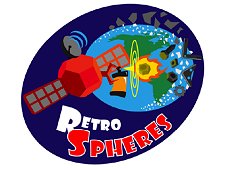 The finals event followed three months of online simulation competitions, during which the initial pool of 96 teams from the United States and 47 teams from Europe was narrowed to nine and six alliances, respectively. Each alliance consisted of three different teams of high school students that joined forces in November 2012 to collaborate and write the best computer programs to run on the SPHERES aboard the space station.

Approximately 230 students from the United States alliances travelled to the Massachusetts Institute of Technology, or MIT, to watch their programs tested aboard the space station live while the European alliances assembled at the ESA ESTEC Research Center in the Netherlands. The two locations were connected via video-conference and the event was broadcast live over NASA TV and an MIT webcast. Astronaut Barbara Morgan and the Zero Robotics Principal Investigator, Alvar Saenz-Otero, presided over the finals at MIT while ESA astronaut André Kuipers presided at ESTEC. Aboard the space station, astronauts Kevin Ford and Thomas H. Marshburn operated the satellites using the students' code.

"ISS Zero Robotics is a fabulous program that opens students' eyes to new possibilities, inspires their creativity and curiosity, and gives them new perspectives on the world and their futures," said Barbara Morgan.

"Today's Zero Robotics finals again featured intense competition between some of the nation's brightest high school students," said Andres Martinez, the program manager for the National Lab Facility team that manages the operation and maintenance of the SPHERES robots from NASA's Ames Research Center, Moffett Field, Calif. "We're proud of all the participants and are excited to see the challenges both the students and SPHERES are capable of overcoming."

Zero Robotics is a programming competition where students are presented with a challenge, "the game." Two teams compete at a time to achieve the best performance in the game. The teams write all of their code via the Zero Robotics website, which has a high-fidelity simulation of the SPHERES. Using the same website the students see simulated results of their code performance. The competition closely resembles the way software is written for spacecraft, requiring the students to write code that controls the satellite position and pointing, communicates with other satellites, and interprets its sensors to determine what to do next. All of these tasks are done autonomously -- once the students write their code, they cannot modify it for that "run;" in the case of the ISS Finals, the code cannot be changed, just like in real spacecraft!

This year's challenge was called RetroSPHERES, which stands for Rapid Entry Trajectory by Retrograde Ablation using the SPHERES. The game was inspired by the looming problem of space debris in low-Earth orbit, which poses danger to astronauts, functioning satellites and space launches. To achieve the game objectives the students programmed their satellites to competitively complete three tasks: virtually deploy micro dust clouds in order to de-orbit small pieces of space debris with high velocity dust collisions, rendezvous with a virtual decommissioned polar satellite to re-purpose parts from the communications antenna, and de-orbit their satellite through an unknown space dust cloud field.

The SPHERES consists of three self-contained satellites, which are 18-sided polyhedrons that are almost 8 inches in diameter and weigh about 8 pounds. Each satellite contains an internal propulsion system, power, avionics, software, communications, and metrology subsystems. The propulsion system uses carbon dioxide, which is discharged through the thrusters. The metrology subsystem provides real-time position and attitude information. Uploaded navigational data and formation flying algorithms provide instructions to the satellites that will be performed autonomously and hold the formation until a new command is given.

Zero Robotics Program Seeks Partners to Expand Outreach and Participation
Starting this summer, middle school students in pilot programs at selected locations within the U.S. will have the opportunity to participate in a five-week program that uses the Zero Robotics Middle School Tournament as a vehicle to teach introductory programming, applied math and physics. Similar to the high school tournament, students in grades 6-8 will form teams to participate in an online simulation game and an on-orbit final space station championship.

Zero Robotics and the SPHERES organizers hope to inspire future scientists and engineers to view working in space as "normal," and grow up pushing the limits of engineering and space exploration. NASA, DARPA, and MIT would like Zero Robotics to become a premier national academic competition for high school and middle school students.

To help achieve this goal, MIT is looking for outreach partners to help spread the word about the tournaments and events. They also are looking for regional partners to help establish teams and coordinate local Zero Robotics communications and competitions. There is an opportunity for graduate students at colleges across the country to apply to work with MIT as a SPHERES expert, with the chance to conduct research using the space station SPHERES facility.

The Zero Robotics High School Tournament 2012 is sponsored by DARPA and NASA, and run by the MIT Space Systems Laboratory and its partners TopCoder, and Aurora Flight Sciences.