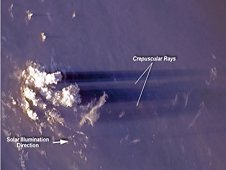 The view of Crepuscular Rays from above the subcontinent of India was published on NASA Goddard Space Flight Center's Earth Observatory website. Near-sunset view of shafts of sunlight rays being projected into a layer of haze behind cloud towers clearly illustrates the true parallel nature of the Crepuscular Rays. (NASA)
View large image 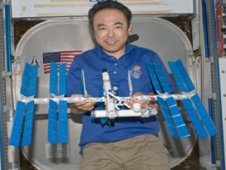 Satoshi Furukawa displays his LEGO® International Space Station model. (NASA)
View large image
(Highlights: First Week of November 2011) -- Students from 148 schools all around the world participated in the fall session of the Earth Knowledge Acquired by Middle School Students (EarthKAM). Students used the onboard EarthKAM camera to take 1,840 Earth observation photos. EarthKAM is a NASA education program that offers a powerful way for students to investigate Earth from the unique perspective of space. The image collection is posted on the Internet at https://earthkam.ucsd.edu/ for both public use and participating classrooms around the world.

The HICO and RAIDS Experiment Payload -- Hyperspectral Imager for the Coastal Ocean (HREP-HICO) has taken 4,400 images to date. The most recent HICO images include Monterey Bay in California, the southern California coastline, the coast of Cyprus and part of the northeast coast of Australia. The experiment analyzes the water clarity, chlorophyll content, water depth and ocean or sea floor composition for naval purposes.

Through Nov. 1, 26,504 images have been received for reviewing and cataloging for the Crew Earth Observation (CEO) experiment. Recent images include Chihuahuan and Big Bend Deserts; Dakar, Senegal; Santiago, Chile; and the Popocatepetl Volcano, Mexico. For this experiment, station crew members photograph natural and human-made changes on Earth. These images provide researchers with key data to better understand the planet.

Satoshi Furukawa completed assembly of a scale model of the International Space Station for the LEGO® Bricks payload. This investigation includes a series of toy LEGO® kits that are assembled on orbit and used to demonstrate scientific concepts.

› View All Science Updates
› Back To Top