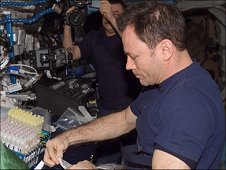 Astronaut Michael Lopez-Alegria, Expedition 14 Commander, prepares a urine sample for the Nutrition investigation. The sample is preserved in the Minus Eighty Degree Freezer, or MELFI, in the Destiny laboratory module. (NASA)
View large image 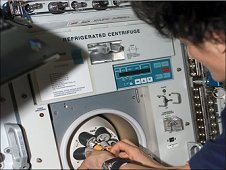 Astronaut Sunita L. Williams, Expedition 15 flight engineer, loads test samples in the Human Research Facility 2, or HRF-2, Refrigerated Centrifuge as a part of the Nutritional Status Assessment, or Nutrition, experiment in the Destiny laboratory of the International Space Station. The results of the Nutrition experiment will be used to better understand the time course effects of space flight on human physiology. (NASA) View large image 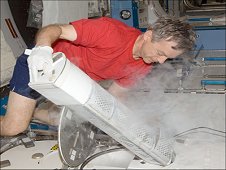 Canadian Space Agency astronaut Robert Thirsk, Expedition 20 flight engineer, performs an insertion of urine samples into the Minus Eighty Degree Laboratory Freezer for ISS, or MELFI, as part of the Nutritional Status Assessment, or Nutrition, study in the Japanese Kibo laboratory of the International Space Station. (NASA)
View large image Could vision changes experienced by astronauts be linked to a vitamin B-12 or folate deficiency? While investigating the vision changes recently identified in astronauts, nutritional assessment data showed similarities to symptoms that occur with vitamin deficiencies, according to a new study published in the March edition of The Journal of Nutrition.

Approximately 20 percent of astronauts living on the International Space Station have reported post-flight vision changes. Previous research, published in the October 2011 issue of Ophthalmology, identified a possible link between the reported vision changes and increased intracranial pressure caused by shifts in bodily fluids from the lower extremities to the upper part if the body, due to microgravity. This may still be part of the problem, but the new study shows there may be other contributing factors. The findings may provide evidence to help understand why some crew members suffer vision-related problems, while others do not.

The nutrition study included 20 astronauts, with 5 experiencing vision or eye anatomy changes. The investigation collected data from crew urine and blood samples taken before spaceflight, while living aboard the station, and after returning to Earth. The samples taken while living in orbit were kept in the station's Minus-Eighty Degree Freezer, or MELFI, and returned to the ground for analysis.

Comparing the blood analysis with nutritional assessments revealed that crew members experiencing vision changes had consistently lower folate levels and higher levels of metabolites. The comparison suggests the vision changes may be due in part to what's called a "dependent one-carbon metabolic pathway" change.

The one-carbon pathway is part of the chemical process the body uses to make DNA, or genetic instructions. The pathways are similar to an assembly line in a factory. If the pathway is not working properly, it gets behind or backs up. This is what happens if there is a vitamin deficiency. Since astronauts participate in dietary and nutritional assessments, researchers were able to rule out common vitamin and nutritional deficiencies.

Enzymes are the workers on the assembly line, and can have different forms -- little changes or variations that occur -- between individuals. These multiple forms are known as polymorphisms. As humans evolve, tiny changes in DNA occur resulting in multiple forms of enzymes. A good example of polymorphisms is blood types -- though blood is blood, there are differences that account for a variety of blood types. Lactose intolerance is another example of polymorphisms in the human body.

Vision Changes
With nutritional deficiencies ruled out, researchers began considering the possibility that polymorphisms, which may be part of the one-carbon pathway, could be causing the vision changes.

Since the folate and metabolite variances in the affected astronauts were seen preflight, there are several theories. These individuals may be more prone to microgravity-induced fluid shifts. They may be affected by small changes in the station's cabin carbon dioxide levels, which are slightly higher than those on Earth. Even small changes in the cabin air mix could increase intracranial pressure. On the other hand, other astronauts exposed to higher carbon dioxide levels did not have vision changes.

In Earth-based studies, the enzyme differences that slow down the pathway causing the backup have been linked to a greater occurrence of migraine headaches and strokes. These types of conditions can be related to increased intracranial pressure.

Results from this investigation also could provide advancements in understanding and treating retinal vascular and optic nerve disorders and diseases on Earth.

"While these results are very exciting, they are preliminary," said Scott Smith, a nutritionist and one of the authors of the recent study from NASA's Johnson Space Center's Nutritional Biochemistry Lab. "The next step is to directly test for the presence of enzyme polymorphisms to verify whether this relates to the vision changes."

"We clearly have identified a piece of the vision puzzle," Smith said. "We now need to go another step forward to assess whether it is a small piece among many others, or a large piece that is a primary cause of this problem. Not only may the results have significant implications for NASA and future astronauts, but the implications for the general population could be profound."

Additional research to expand understanding of how life in space affects astronaut vision is planned, and NASA recently selected eight investigations as part of a broader suite of astronaut health research.