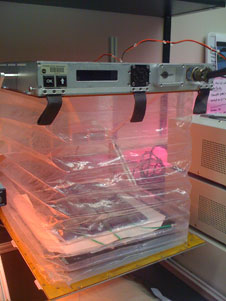 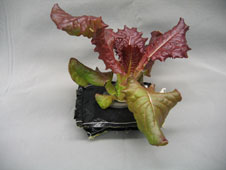 With all the prepackaged gardening kits on the market, an exceptionally green thumb isn't necessary to grow your own tasty fresh vegetables here on Earth. The same may hold true for U.S. astronauts living and working aboard the International Space Station when they receive a newly developed Vegetable Production System, called VEGGIE for short, set to launch aboard SpaceX's Dragon capsule on NASA's third Commercial Resupply Services mission next year.

"Our hope is that even though VEGGIE is not a highly complex plant growth apparatus, it will allow the crew to rapidly grow vegetables using a fairly simple nutrient and water delivery approach," said Howard Levine, Ph.D. and chief scientist, NASA's Kennedy Space Center International Space Station Research Office.

Gioia Massa, a postdoctoral fellow in the Surface Systems Group of Kennedy's Engineering Directorate, has been working with the International Space Station Research Office to validate the VEGGIE hardware here on Earth before it takes flight next year.

"VEGGIE could be used to produce faster-growing species of plants, such as lettuce or radishes, bok choy or Chinese cabbage, or even bitter leafy greens" Massa said. "Crops like tomatoes, peas or beans in which you'd have to have a flower and set fruit would take a little longer than a 28-day cycle."

It may not sound like a big deal to us Earthlings who can just run out to our local produce stand or supermarket when we have a hankering for a salad, but when you're living 200 miles above the surface of the planet, truly fresh food only comes a few times a year.

"When the resupply ships get up there, the fresh produce gets eaten almost immediately," Massa said.

Weighing in at about 15 pounds and taking up the space of a stove-top microwave oven, the stowable and deployable VEGGIE system was built by Orbital Technologies Corporation, or ORBITEC, in Madison, Wis. The company designed the system to enable low-maintenance experiments, giving astronauts the opportunity to garden recreationally.

"Based upon anecdotal evidence, crews report that having plants around was very comforting and helped them feel less out of touch with Earth," Massa said. "You could also think of plants as pets. The crew just likes to nurture them."

In simple terms, the VEGGIE system works like this: Clear Teflon bellows that can be adjusted for plants as they grow are attached to a metal frame housing the system's power and light switches. A rooting pillow made of Teflon-coated Kevlar and Nomex will contain the planting media, such as soil or claylike particles, along with fertilizer pellets. Seeds either will be preloaded in the pillows on Earth or inserted by astronauts in space. To water the plants, crew members will use a reservoir located beneath the pillows and a root mat to effectively add moisture through an automatic wicking process.

VEGGIE is set to join other plant growth facilities that vary in size and complexity, such as the Lada greenhouse unit and the ABRS, short for Advanced Biological Research System. VEGGIE is the simplest of the three designs, but has the largest surface area for planting and is expected to produce data on a more regular basis. Levine noted that the ability to grow plants in microgravity has really evolved throughout the past decade.

"What's interesting is that plants breathe, just like humans," Levine said. "Initially, biologists tried to grow plants in sealed compartments but that didn't work because without continuous airflow bringing carbon dioxide and oxygen to plants for respiration, they won't thrive."

An added benefit of the VEGGIE system is that it requires only about 115 watts to operate, less than half the energy it takes to power a desktop computer and monitor. The blue, red and green light-emitting diodes, or LEDs, are bright enough for crops to grow, but energy efficient enough for a place where power is at a premium.

"We really only need the red and the blue LEDs for good photosynthesis, but we have the option of turning the green LEDs on, which will make the overall light look white, making the plants look green rather than purple," Massa said.

Once the facility reaches the station, astronauts will unpack it and install it into one of the station's EXPRESS racks. Then, they'll report back to Kennedy's International Space Station Research Office about the setup and work that goes into planting, maintaining and harvesting the crops, as well as the effort that goes into pillow disposal and sanitation.

Mary Hummerick, a microbiologist at Kennedy, will be awaiting swab samples and frozen plant tissues to return from space so she can analyze them for bacteria and microorganisms that could adversely affect the crew. If those numbers are acceptable, NASA could give the go-ahead for crews to start eating what they grow.

NASA is looking into other ways to use the VEGGIE facility once its operation is validated on the first flight to the station.

"You could have bio-behavioral studies on the effect of growing edible plants compared to ornamental plants with flowers, nutritional studies, psychological studies, or you could grow herbs like mint and basil," Massa said.

The agency recently released a NASA Research Announcement asking for those types of proposals from peer-reviewed researchers to join in with their own VEGGIE experiments. Prospective researchers also will have to detail their plans for involving students in K-12 classrooms and how their experiments would help teach kids about science, technology, math and engineering, or STEM.

"There's definitely an outreach component to VEGGIE and we're looking at reaching the up-and-coming generation with STEM activities," said Levine. "We're leaving it up to the researchers to propose how to engage and enthuse a significant number of students with their experiments."

While a successful run of VEGGIE would open innumerable possibilities for future experiments, the near-term goal will be seeing whether the hardware performs as expected on the station come next year.