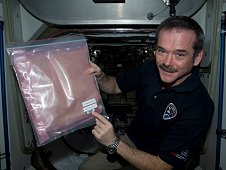 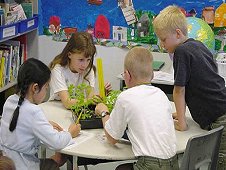 During a previous Tomatosphere program, students studied the growth of their tomato plants in Miss Smith's third grade class at Langley Fundamental Elementary, Vancouver, British Columbia, Canada. The students took their plants home to grow in their gardens over the summer. (Tomatosphere)
View large image The Tomatosphere Project has won the 2013 Natural Sciences and Engineering Research Council of Canada's (NSERC) Award for Science Promotion, which recognizes outstanding contributions to the promotion of science.

Tomatosphere was selected for stimulating and inspiring students to see the relevance of science not only in the classroom, but also in -- and out of -- this world. Since the project began in 2001, over 2 million Canadian students have taken part in Tomatosphere by growing tomatoes exposed to a space environment to learn about the exciting world of science, space exploration, food and nutrition.

Currently 600,000 tomato seeds for the project have been orbiting Earth aboard the International Space Station since July 2012, when the space shuttle Atlantis delivered them on STS-135, its final flight. Canadian astronaut Chris Hadfield will bring the seeds back to Earth in May. They then will be distributed to 14,500 classrooms across Canada and the United States, where students will plant them and observe their germination rates.

The Tomatosphere project shares this award with the many educators and students who have nurtured their tomatoes plants from sprouts to seedlings (and maybe even tasted the fruits of their labor) in the name of science, learning and discovery!

Tomatosphere is sponsored by the Canadian Space Agency (CSA), Heinz Canada Ltd, HeinzSeed, Stokes Seeds and the University of Guelph. CSA also would like to recognize the work and dedication of the Tomatosphere team, including Dr. Michael Dixon of the University of Guelph; Dr. Robert Thirsk and Ron Thorpe, who co-founded the project; and Robert Morrow, the project's highly dedicated project manager.

This original story was written and published by the Canadian Space Agency on March 26, 2013.