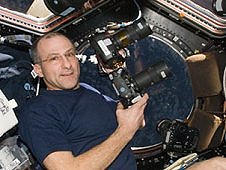 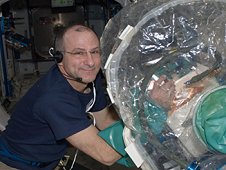 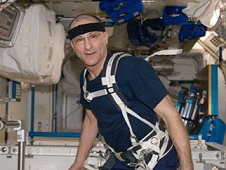 NASA astronaut Don Pettit, Expedition 30 flight engineer, equipped with a bungee harness, prepares to exercise on the Combined Operational Load Bearing External Resistance Treadmill, or COLBERT, in the Tranquility node of the International Space Station. (NASA)
View large image There are only so many hours in a day, as many people lament while trying to fit in everything they hope to accomplish for work, family and fun. It seems like everyone could use more time. With only 24 hours in a day, people have to divvy up the valuable commodity according to their priorities. This can be a challenging juggling act for anyone, but when you live and work in space, like the crew of the International Space Station, the setting itself can determine time and tasks.

Astronauts aboard the space station are no strangers to the importance of a schedule. In a recent blog entry, NASA astronaut Don Pettit addresses the topic of timekeeping and the challenge of balance. He points out that, whether living in a habitat in the ocean, the Antarctic, or in space, survival is the first order of business. In the unrelenting environment of space, the setting can alter priorities with little or no notice. A piece of space debris or unexpected system failure could very quickly reorient every crew member from the task at hand to a united effort.

"When humans venture into a harsh wilderness, the fraction of time on task shrinks, while the effort to simply be there grows," said Pettit. "You are lucky to log six hours of mission tasking and six hours of sleep. The rest of the time is spent simply trying to stay alive."

When there are no immediate dangers, the crew focuses on scheduled workloads and daily routines. The breakdown may vary from day-to-day, but in general includes a 1-hour meeting with mission control, a 12-hour workday, a second 1-hour mission control tag up, and an hour to finalize tasks before dinner. Sleep and personal time fall within the remainder of the 24-hour day.

"This leaves about a nine-hour slice of off-duty time until the whole routine begins anew," said Pettit. "Note well that this is not 'free time,' but 'off duty time' -- a significant distinction when living on a ship, be it on the ocean or in space."

Within the 12-hour working day, there is a further breakdown of tasks. In general, this comes to 6.5 hours on primary mission tasks, such as research, operations, and maintenance. The crew members also spend 2.5 hours on physical training for both research goals and their own health. What time remains is quickly consumed by preparations for the primary tasks, unplanned repairs, and general upkeep to maintain smooth conditions throughout the mission.

"The breakdown of primary mission tasks is coordinated between the critical systems and the research planners," said NASA's International Space Station Program Scientist Julie Robinson, Ph.D. "Research priorities from the different sponsor organizations are integrated into a single research plan."

While Sundays are light workdays for the crew of the space station, there is no such thing as a weekend off when living on orbit. "To date, we have had four weekends in a row where something came up that trumped our off-duty time," said Pettit. "During this period we worked over 30 days without a break. When you go to the frontier, you are there to do something productive, not to sip tea and eat bonbons."

Pettit, who returned to Earth on July 1, shares a tip in his blog entry on his own way of making the most of any break time on orbit. This is when he might compose a blog entry, send notes to family, or even work on voluntary science or education activities. Citing organization as the key, he keeps a cheat sheet of 5-, 15-, and 30-minute task options in his pocket, which he refers to when there is a pause in mission tasks.

"Then, when you truly have a significant span of off-duty time, perhaps on a Saturday night, there is nothing more awe-inspiring than floating for an orbit in the cupola and observing Earth," said Pettit. "My personal slice of time pie may be only a sliver, but oh, how sweet it is!"