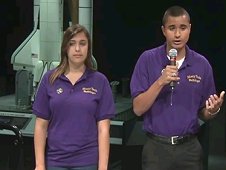 Olivia Ouellet and Miguel Velez (Kayla Nolette, Leighton Noel, and Victoria Holbert not pictured) presented their findings on dental health concerns due to higher growth rates for Lactobacillus acidophilus, a bacteria that leads to tooth decay, in microgravity as part of the 2012 SSEP National Conference. (NCESSE/Smithsonian)
View large image 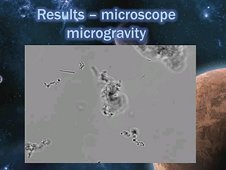 This slide from the "Growth Rate of Lactobacillus acidophilus in Microgravity" study done aboard STS-135 shows a close up view of the bacteria after exposure to space. (NCESSE/Smithsonian)
View large image 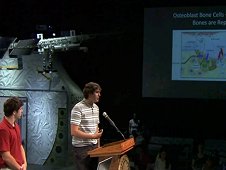 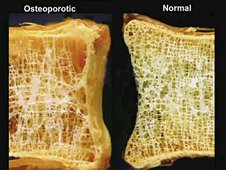 This slide from the "Effect of Microgravity on Osteoblast Specialization and Bone Growth" presentation shows the impact of osteoporosis compared to a healthy human subject. (NCESSE/Smithsonian)
View large image Science reports are for amateurs! Students these days have an exciting new way to summarize and share topics not only with their class, but with the entire education and scientific community. As part of the Student Spaceflight Experiment Program (SSEP), young adults from around the country conceived, designed and launched their own scientific investigations to the International Space Station. As results roll in, they share their research findings with their communities here on Earth.

In exploring their individual scientific questions, designing their own experiments and then following through with the final analysis, students from 5th grade through college experience the full scientific process. The teams present their findings during the annual SSEP National Conference. The Smithsonian National Air and Space Museum, which hosts the event, archives these presentations in the Moving Beyond Earth gallery to enhance and inspire visitors long after the conference ends.

"Student teams do oral presentations on their experiments and results at the SSEP National Conference, held each July," said Jeff Goldstein center director, SSEP National Program Director, National Center for Earth and Space Science Education (NCESSE). "We have held two to date. The Smithsonian tapes each presentation and puts them up at the Air and Space YouTube site."

The SSEP on-orbit research opportunity is enabled through NanoRacks LLC, which is working in partnership with NASA under a Space Act Agreement as part of the utilization of the station as a National Laboratory. The program began in June 2010, offering five opportunities to date: two on space shuttle flights, as well as SSEP Missions one, two, and three aboard the space station. So far, student results are in from the two shuttle flights, including the following presentations from the 2012 SSEP National Conference.

The Ida County, Iowa, Team 1, from Ridge View High School included students from grades 9 to 12. Their research on the STS-135 space shuttle Atlantis flight tackled the question: "How Does Microgravity Affect the Maximum Cell Size of Tardigrades?" The growth rate of these microscopic, water-dwelling animals, also known as "water bears," after exposure to microgravity was not significantly different than the controls on Earth. The data are inconclusive, however, because the space Tardigrades had insufficient food supplies.

A team of 11th grade students from Montachusett Regional Vocational Technical School District in Fitchburg, Massachusetts, shared their findings on the topic of "The Growth Rate of Lactobacillus acidophilus in Microgravity." Their analysis, also done aboard STS-135, indicated that these bacteria, which contribute to plaque formation on teeth, exhibited a faster growth rate in microgravity than on Earth. This could mean a higher dental decay risk for astronauts while living in space. Studies in this area also may lead to new information and treatments for tooth decay on Earth.

Another interesting finding presented at this year's conference came from a team of 11th and 12th graders from Bridgewater-Raritan High School, Bridgewater-Raritan Regional School District, New Jersey. These students researched bone loss in space with their topic: "Effect of Microgravity on Osteoblast Specialization and Bone Growth."

Their experiment flew on STS-135 and looked at how human growth hormones impacted mouse osteoblasts -- bone formation cells. Many of the delicate cells from both space and ground samples required resuscitation -- meaning they were revived with oxygen and nutrients for analysis. There were no significant differences found between the ground control cells and those exposed to microgravity, showing the cells could grow in space. Though results were inconclusive, investigations like this may contribute to bone loss treatments for humans in space and on Earth.

According to Goldstein, students now will have the chance publish their data in science journal format, continuing a real research approach to the microgravity education project. But while close to 70 investigations have flown, getting those results through ground analysis and reporting on them takes a little more time.

"In the coming months, we are going to send out a template to communities for a research paper, which will provide a format that captures the problem addressed, the current understanding of the science, the experiment proposed, the conduct of the experiment, and analysis and reporting," said Goldstein. "We will then publish these papers on the SSEP website under a new results section."

On November 15, 2012, the student researchers had the unique opportunity to speak via live downlink with the astronauts that conducted their experiments aboard the space station. The National Air and Space Museum hosted the live downlink, putting astronauts Kevin Ford and Suni Williams in touch with the eager crowd of educators and students. Williams was the crew member to activate the current round of SSEP investigations, which arrived on SpaceX Dragon this past October. The Mission 1 and 2 studies returned to Earth for analysis aboard the Soyuz vehicle Nov. 18, along with crew members Suni Williams, Aki Hoshide and Yuri Malenchenko.

SSEP Mission 4, the next flight opportunity for student scientists, is now accepting proposals from student teams around the country and internationally. Selected investigations are scheduled to launch to the space station in the fall of 2013, continuing the journey of scientific inspiration through real research opportunities for the next generation.