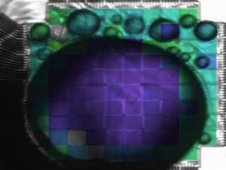 Liquid boiling on a heater array during the low gravity produced by the NASA KC-135 aircraft. (NASA)
View large image 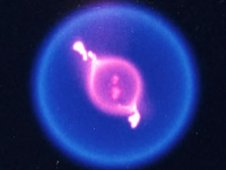 Burning droplet from the Droplet Combustion Experiment. (NASA)
View large image The Space Shuttle Discovery, which launched on Thursday, Feb. 24, 2011, blasted off into space en route for a rendezvous with the International Space Station. The shuttle carries not only the crewmembers, but some fascinating research and technology. Payloads include 5 investigations for the crew to perform and 24 studies with hardware or samples. On the trip back to Earth, Discovery will return 22 investigations with samples or data for the ground researchers to study.

The following are some of the investigations flying on STS-133, grouped by their focus area.

Four biology and biotechnology investigations (two conducted during the STS-133 mission and two long duration performed on the space station) examine cell growth, immune system function, bacterial development, and plant growth under microgravity conditions. National Laboratory Pathfinder - Vaccine - Methicillin-resistant Staphylococcus aureus, or NLP-Vaccine-MRSA -- This investigation uses microgravity to examine Methicillin-resistant Staphylococcus aureus, a pathogenic (i.e., disease-causing) organism resistant to most common antibiotics. The goal is to develop a potential vaccine for the prevention of infection on Earth and in microgravity. Mouse Immunology Effect of Space Flight on Innate Immunity to Respiratory Viral Infections -- This investigation examines the impact of microgravity on the immune system by challenging it with respiratory syncytial virus or RSV.

National Laboratory Pathfinder - Cells - 6 (NLP-Cells-6) -- This investigation assesses the effects of microgravity on the formation, establishment, and multiplication of undifferentiated cells. It also evaluates changes in cell structure, growth and development, genetic changes, and differential gene expression of Jatropha curcas, a biofuel plant. This study identifies significant changes that occur in microgravity, which could contribute to the development of new cultivars of this biofuel plant.

Dynamism of Auxin Efflux Facilitators, CsPINs, Responsible for Gravity-regulated Growth and Development in Cucumber, or CsPINs -- This investigation uses cucumber seedlings to analyze the effect of gravity on gravimorphogenesis (i.e., peg formation) in cucumber plants.

Cardiac Atrophy and Diastolic Dysfunction During and After Long Duration Spaceflight: Functional Consequences for Orthostatic Intolerance, Exercise Capability and Risk for Cardiac Arrhythmias, or Integrated Cardiovascular -- This investigation quantifies the extent, time course, and clinical significance of cardiac atrophy (i.e., decrease in the size of the heart muscle) associated with long-duration space flight. This experiment identifies the mechanisms of this atrophy and the functional consequences for crewmembers who will spend extended periods of time in space.

Long Term Microgravity: A Model for Investigating Mechanisms of Heart Disease with New Portable Equipment, or Card -- This investigation studies blood pressure decreases in the human body exposed to microgravity on board the space station. Vascular Health Consequences of Long-Duration Space Flight, or Vascular -- This investigation determines the impact of long-duration space flight on the blood vessels of crewmembers.

The Dietary Intake Can Predict and Protect Against Changes in Bone Metabolism during Spaceflight and Recovery, or Pro K -- This investigation is NASA's first evaluation of a dietary countermeasure to lessen crewmember bone loss. Pro K proposes that a flight diet with a decreased ratio of animal protein to potassium will lead to decreased loss of bone mineral. Pro K has impacts on the definition of nutritional requirements and development of food systems for future exploration missions, and could yield a method of counteracting bone loss that would have virtually no risk of side effects. During previous on-orbit, ground, and bed-rest studies, it was found that participants who ate more servings of fish rich in omega-fatty-3 acid per week had higher bone density than those who had fewer servings.

SOdium LOading in Microgravity, or SOLO -- This investigation studies the mechanisms of fluid and salt retention in the body during space flight. Samples from this study will come back to Earth on Discovery’s return flight.

Validation of Procedures for Monitoring Crew Member Immune Function known as Integrated Immune -- This investigation looks at the clinical risks to the human immune system during spaceflight. It also has samples returning to Earth as part of the mission for STS-133.

Investigations are only a part of the STS-133 mission. The crew will also reach a major milestone for the station by completing the interior outfitting of the National Laboratory. They will add a final rack to the Express Racks, which are bench-like structures that support equipment in the orbiting lab. The installation of the last rack, known as Express Rack 8, furnishes the facility with full research capabilities.

Another technological advancement launching on STS-133 is Robonaut, which serves as a springboard to help evolve new robotic capabilities in space. Robonaut demonstrates that a dexterous robot can launch and operate in a space vehicle, manipulate mechanisms in a microgravity environment, operate for an extended duration within the space environment, assist with tasks, and eventually interact with the crewmembers.

Also part of the Space Shuttle Discovery payload is a new facility, the Boiling eXperiment Facility or BXF. This equipment enables the study of boiling in space, paving the way for two new investigations: Microheater Array Boiling Experiment, or BXF-MABE and Nucleate Pool Boiling Experiment, or BXF-NPBX Boiling in microgravity differs from boiling here on Earth. In space, there is a lack of buoyancy, so the steam from boiling liquids does not rise. Studies completed in the BXF may generate new technology for energy production and the design of cooling systems on Earth and in space vehicles.


Without bouyancy or convection, boiling fluids behave quite differently in space. (Video courtesy of NASA)