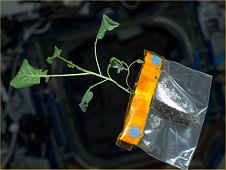 Zucchini taking root inside of a plastic baggie aboard the International Space Station gains celebrity status in the Diary of a Space Zucchini of NASA astronaut Don Pettit. (NASA)
View large image 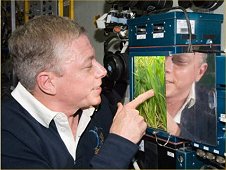 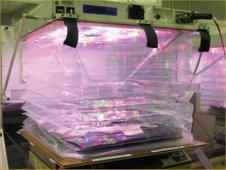 The VEGGIE greenhouse will fit into an EXPRESS Rack on the International Space Station for use with plant investigations on orbit. (NASA)
View large image 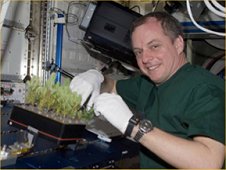 Astronaut TJ Creamer with White Spruce trees grown within the Advanced Biological Research System, or ABRS, on the International Space Station. (NASA)
View large image There are many mascots for space science and exploration, but who knew that giving a voice to a vegetable would catch on and inspire kids on Earth? These students may not necessarily want to consume their zucchini when parents serve it at dinner, but they're eating up the chance to learn more through a new NASA blog called Diary of a Space Zucchini .

The personification of this zucchini seed, now plant, was the inspiration of astronaut Don Pettit, or "Gardener," as he is dubbed by the sassy veggie's blog posts. Between other duties aboard the International Space Station, Pettit used some of his free time to conduct the personal biology experiment to see how well he could grow a zucchini seed inside a plastic baggie.

What fans of the blog may not realize is that plant studies in space are nothing new. While the chronicles of the space zucchini are entertaining and educational, vegetation investigations on the station have real scientific goals for Earth and space exploration benefits. From improved crop production on the ground to one day providing fresh produce on orbit, there is much to be learned from sprouts in space.

One way researchers investigate plants aboard station is in an apparatus called the Advanced Biological Research System, or ABRS. This facility has two growth chambers; each a closed system with temperature, light, and atmospheric control. The ABRS hardware can operate as a facility, as well as a transport chamber to carry samples to and from the ground.

The Transgenic Arabidopsis Gene Expression System, or TAGES, investigation is just one set of growth experiments conducted in the ABRS. This study looked at Arabidopsis thaliana, or thale cress, which was altered to include a gene that activates by fluorescing, or glowing, under certain stress situations. This enabled the plants to serve as real-time biomonitors -- organisms used to determine the quality of the surrounding environment. Researchers specifically looked at the impacts of drought, inadequate light, and uneven temperature in TAGES.

In the Zvezda module aboard station, the crew uses another plant experiment facility, known as the Lada greenhouse. The design of this hardware includes a wall-mounted growth chamber that provides long-term, ready access for crew interaction. Lada includes light and root zone control, but relies on the cabin environment for humidity, gas composition, and temperature control.

The Growth and Development of Higher Plants through Multiple Generations, or Rastenia, investigation is currently operating in the Lada greenhouse. Sponsored by the Russian Federal Space Agency, or Roscosmos, this study looks at the use of plants as not only a food source, but as a natural addition to regenerative life support systems.

In essence, plants can help in providing clean air and water for the crew, according to Howard G. Levine, Ph.D., chief scientist for the International Space Station Ground Processing and Research Office at NASA's Kennedy Space Center. "Plants can remove the carbon dioxide that we breathe out, produce oxygen that we need to breathe in, and also take in 'dirty' water and purify it by passing it through the plants themselves," said Levine.

A new, aptly named facility for the study of plants aboard station is the Vegetable Production System, or Veggie. The goal of this bellows-like growing unit is to produce salad-type crops to provide the crew with a safe and nutritious source of fresh food while in orbit. Veggie provides lighting and nutrient delivery, but it will use station cabin temperature control and atmosphere as a source of carbon dioxide to promote plant growth, similar to the Lada greenhouse.

Veggie is planned to launch to the station on SpaceX-3, scheduled for the summer of 2013, and will include a design focused on plant health. This includes a canopy with LEDs of specific colors and intensity to supply optimal light for different growth stages, as well as a specialized water delivery method.

"The rooting pillow where seeds will germinate and nutrients and water will be supplied is one of the key technologies that will be tested during the initial deployment," said Charlie Quincy, Research Advisor to the International Space Station Director at Kennedy. "The root pillows will be returned to Earth so microbial assays can be performed. Selected plant materials will also be returned for detailed investigations."

Thanks to horticulture in orbit, researchers know more about plant root structure and development, growth medium challenges, and even how best to water the plants. Scientists design studies to learn how to influence growth patterns, based on non-gravitational factors, such as light and moisture.

Quincy points out just how different gardening is in space. "With regards to water delivery in a microgravity environment, the laws of physics make this difficult because all liquids want to assume a spherical shape, which will attach to things and be moved by wicking forces," said Quincy. "Plants will not survive if their roots are completely surrounded by liquid water, so a water delivery system had to be developed."

Vegetation studies aboard station can improve knowledge for crop production on the ground, as well. Levine explains that by removing gravitational forces, other elements that influence plant growth, such as light and nutrients, are easier to study. "One example of this has been the TROPI experiments, in which the effects of light on phototropism could be investigated in space without the complications associated with gravitropism interfering with the observations," said Levine.

Followers of the zucchini blog already enjoy Pettit's creative approach to biology, which includes science, adventure, and even romance! This is a fun vehicle to help educate the public on plant studies in space, as the zucchini is far from alone aboard station. Among the other investigations, Pettit also has broccoli and sunflower seedlings sprouting and, according to the Zucchini, these plants are happily taking root in their orbiting home. "This is hard to explain to a non-plant," said Zucchini. "But I am feeling very zucchini now."