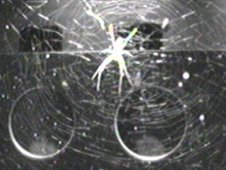 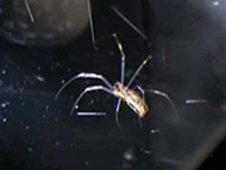 One of the golden orb spiders aboard the International Space Station. (NASA)
View large image 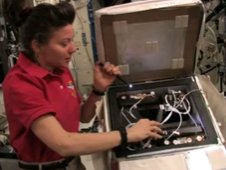 NASA astronaut Cady Coleman shows the spider habitat. (NASA)
View large image Ever since they were announced, the spiders in space have been living in the limelight. This is, of course, the point -- to watch and learn as the pair of golden orb spiders, or Nephila clavipes, adapt to living in microgravity on the International Space Station. As a result, these two arachnids, dubbed Gladys and Esmeralda by astronaut Cady Coleman, are reaching celebrity status.

The spiders are part of the scientific investigation called Commercial Generic Bioprocessing Apparatus Science Insert-05, or CSI-05. This study houses the two spiders in separate habitats and includes chambers for their food supply of fruit flies. Artificial light simulates day and nighttime, as well as temperature and humidity control. The habitats reside in the Commercial Generic Bioprocessing Apparatus, or CGBA, on the station, which controls imaging of the arachnids’ activities.

After launching in style as part of the last flight of Endeavour on May 16, 2011, the spiders found their popularity continued to grow. Teachers registered more than 130,000 students so far, gaining instructional materials and the chance to tune in and follow the arachnids' antics via space station videos. In one of the more recent video uploads, Esmeralda displayed diva-like qualities as she showed her hunting skills to be as sharp as ever in microgravity. The video of her capturing a fruit fly on May 26, 2011 is on now available for viewing on YouTube.

Schools around the globe continue to participate in the spider study by visiting BioEd Online. From this site teachers can download a guide to create a control habitat, complete with spider, for their classrooms. "Spiders and space are two things that capture the imagination of most kids, so it's a recipe for fascinating science in the schools," comments International Space Station Associate Program Scientist Tara Ruttley. "I think this will create great memories for the students, and a way to show them how science can be fun as their science classes become more challenging through the years."

Even before they left the ground, the popularity of the spiders was evident, as seen at the prelaunch NASA tweetup on April 28, 2011. This NASA-hosted event brought together registered Twitter users to listen to NASA experts speak on mission-related topics. The participants then shared this information in real time over the social media site. When one of the siblings of Gladys and Esmeralda -- who were already aboard the shuttle on the launch pad -- made a live appearance, it inspired a frenzy of tweets from new fans.

Ruttley was one of the tweetup speakers and also had the unofficial role of spider wrangler at the event, which took place at NASA's Kennedy Space Center, Fla. "As I gave my talk at the tweetup, the spider was passed around within its habitat, seemingly happy enough to spin a pretty amazing web," said Ruttley. "I think the spiders were such a hit with those at the launch because a spider spinning a web is something that everyone can understand and relate to."

The golden orb spider actually spins and then consumes its web on a daily basis. This practice provides the protein necessary to enable renewed web activities each day. Ruttley found this out firsthand, "I noticed the web was gone the next morning, this is because the golden orb spiders actually eat their web overnight and start again the next day, all fresh."

The golden orb spider usually spins a three dimensional, asymmetric web on Earth, but in space they spin more circular webs. The current spiders also prefer to spin according to a timetable, as compared to the orb spiders -- Larinioides patagiatus and Metepeira -- from the previous CSI-03 investigation, who would spin at all times of day. "These spiders seem to stick to a more regimented schedule of spinning in the early morning hours and taking their web down right after lights out." said Stefanie Countryman, Project Manager for CSI-05 at BioServe Space Technologies, University of Colorado.

By watching how a control spider spins on Earth, compared to Esmeralda and Gladys on the space station, students and scientists hope to better understand behavior changes in response to the microgravity environment. The investigation on the space station may only last for 45 days, but the impact of these tiny celebrities will live on in research data and in the minds of their admirers.