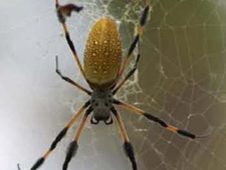 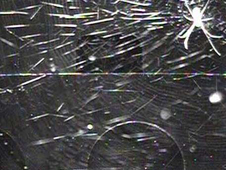 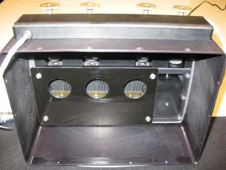 Internal view of Commercial Generic Bioprocessing Apparatus Science Insert (CSI) spider habitat. (BioServe)
View large image The very idea of spiders in space brings to mind campy, black and white horror films involving eight-legged monsters. In actuality, it is a scientific investigation called Commercial Generic Bioprocessing Apparatus Science Insert-05 or CSI-05, in which researchers observe arachnid habits in a microgravity environment. This is the second spider investigation on the International Space Station -- the first was CSI-03 -- and researchers have high hopes that the sequel will eclipse the original.

Scheduled to launch April 29, 2011 with STS-134, the spider habitat will transfer from the space shuttle Endeavour to the space station. Once aboard, the crew will place the two habitats into the Commercial Generic Bioprocessing Apparatus or CGBA. This equipment will maintain a consistent temperature, humidity and lighting cycle for the spiders and their sustenance supply of fruit flies. The CGBA also controls imaging for the investigation.

The spider pair currently planned for investigation with CSI-05 are both golden orb spiders, or Nephila clavipes, which spin a three dimensional, asymmetric web. This is different from the two orb spiders, or Larinioides patagiatus and Metepeira, that launched to the space station on STS-126, which were selected specifically for the symmetry of their web formation. Scientists are looking to see if and how the arachnids will spin their webs differently in microgravity. The results will help them to understand the behavioral role of gravity for the spiders and their fruit fly companions.

"I think people can relate to everyday insects and they can understand why the experiment is of interest," said Stefanie Countryman, coordinator for CSI-05. "Plus, the visual aspects of this experiment make it very appealing to the general public."

When a sequel does top the original, in science as in movies, it usually has something to do with lessons learned during the first production. The CSI-03 investigation, for instance, was unfortunately restricted to eight days, due to the spiders' fruit flies food ‘sliming’ the observation window. This obscured the view inside the habitat and limited the study. For CSI-05, which is funded by the National Space Biomedical Research Institute or NSBRI and the NASA National Lab Education Office, the fruit flies will have a separate compartment from the spiders. The crew will slowly introduce the flies -- approximately every four days -- into the two individual spider habitats, which should allow for clear imagery through the viewing window for the full 45-day duration of the investigation.

The fruit flies are not, however, simply nourishment for the spiders. They are actually a secondary study themselves. Scientists plan to look at their mobility over time to see if and how they react to the microgravity environment. They should be able to observe growth, behavioral and flight patterns as the flies develop.

There also is an important education element to this investigation, sponsored by Baylor College of medicine Center for Educational Outreach and Orion’s Quest. While the N. clavipes is spinning in space, students on Earth will develop and observe their own spider habitats. Teachers can use a curriculum found on bioedonline.org. This Web site includes daily images sent from the space station to the BioServe Payload Operations and Control Center. This allows students to compare their spiders' spinning habits to those of the spiders in microgravity in near real time. Orion's Quest Web site -- orionsquest.org -- will focus on the habits of the fruit flies in space.