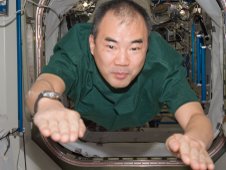 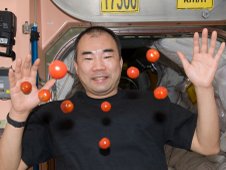 "The space station environment provides a unique classroom in space to teach young children about the words such as 'float' and 'astronaut' by showing them how astronauts float in space," said Matthew Keil in the Teaching from Space Office at NASA's Johnson Space Center in Houston.

Space station astronaut Soichi Noguchi completed four educational videos for "Sesame Street" during his stay on the International Space Station from December 2009 to June 2010. The four videos are airing on "Sesame Street" throughout the fall 2010 season. On the episode "F is for Float" -- show number 4214 -- Noguchi held up the letter "F" to represent the word "float" while he floated around the space station to demonstrate the word.

"Word on the Street" -- show number 4222 -- featured Noguchi explaining to the character "Murray" what the word "float" means, using similar demonstrations with a lemon, socks and a ball.

On the episode "A is for Astronaut" -- show number 4225 -- Noguchi held up the letter "A" to represent the word "astronaut." Noguchi sounded out the letter and the word for children.

Sesame Workshop approached the NASA Teaching from Space Office for assistance in implementing more science and math curriculum into their programming by using the unique educational environment of the space station, NASA centers and facilities and the unique people who work at NASA.

"I am an educator who is very interested in making connections between curriculum and everyday life experiences that students encounter," said Keil. "There are many teachable moments that exist in every NASA mission. Our job is to make sure educators and students are aware of these moments and assist them in connecting these moments to what they are teaching or learning in school and at home."

The shows are repeated and archived at the following link by using the show numbers to locate individual segments: