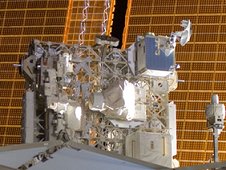 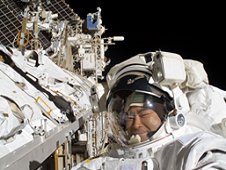 Location of NASA’s Space Communications and Navigation Test Bed on the International Space Station. The astronaut conducting a spacewalk is Akihiko Hoshide of the Japan Aerospace Exploration Agency (JAXA). (NASA)
View large image Communication is key to just about any endeavor. Having the ability to update and modify communication capabilities to reflect the latest upgrades without impacts to mission time or a trip back to Earth ensures optimal communication continues. In orbit reconfiguration for spacecraft radios and systems, including those on the International Space Station, is the goal behind the Space Communications and Navigation (SCaN) Testbed.

The SCaN Testbed began conducting experiments in April after completing its checkout and commissioning operations aboard the space station. The testbed is installed on the EXPRESS Logistics Carrier-3 (ELC-3) on the space station truss. The installation, activation, checkout and commissioning activities resulted in a healthy report card for the launch software, the three software defined radios (SDRs), and the antennas, avionics and other subsystems. SDRs are radios that used to consist of hardware such as decoders, filters and modulators, but are now being replaced with software running in general purpose signal processors.

The testbed's purpose is to allow for the development, testing and demonstration of cutting-edge communications, networking and navigation technologies in the challenging environment of space. These advances will enable technology developers and mission planners to understand how NASA can use SDRs in future missions as well as develop new concepts, such as new algorithms for determining orbits using GPS. The technology also can help advance similar communications tools here on Earth. SDRs are a viable technology for ground based platforms and are already being used in smart phones and other terrestrial applications. NASA's support for a common, open architecture aids in the development of open standards for other domains beyond space.

The SCaN Testbed is the first experimental laboratory in space to demonstrate SDR communications, networking and navigation technologies, which increases use of space station as an international testbed. It provides the only venue in space to understand, test and mature SDR technologies to reduce risk for future missions -- all without impacting existing operations.

"The SCaN Testbed represents a significant advancement in SDRs and its applications for NASA," said David Irimies, project manager for the testbed, Glenn Research Center, Cleveland, Ohio. "Investigating these SDR technologies in the dynamic space environment increases their technology readiness level and maturity, which in turn can be used for future missions as risk reduction."

The ability to change the radios' configurations allows the scientists to use them for a multitude of functions, some uses of which haven't been investigated yet. New software changes can be sent up on a communications link and will add different functions, accommodating new mission needs and goals, something traditional radio devices cannot do after launch. Initial experiments underway include S- and Ka-band SDR technology advancements, Global Positioning System (GPS) technology advancements, and making existing communications paths, such as in the radio frequency Ka-band, even more capable than in the past.

The Space Telecommunications Radio Standard (STRS) is NASA's standard for common SDR interfaces radio and reconfiguration. The testbed's experiments will contribute SDR applications to the STRS repository, and will enable future hardware platforms to use common, reusable software modules to facilitate interoperability across platforms, and reduce development time and costs.

Glenn Research Center leads the SCaN Testbed multi-center team, which includes the agency's Goddard Space Flight Center in Greenbelt, Md.; Jet Propulsion Laboratory (JPL) in Pasadena, Calif.; and Johnson Space Center in Houston. General Dynamics of Scottsdale, Ariz., and Harris Corp. of Melbourne, Fla., developed two of the three SDRs under cooperative agreements with NASA. The third SDR was developed by JPL and is similar to the SDR now on the rover Curiosity. The SCaN Program Office in the Human Exploration and Operations Mission Directorate at NASA Headquarters in Washington manages, oversees and funds the testbed.

The future of communications aboard the space station will improve with the SCaN Testbed's ability to update and modify capabilities with minimal impacts to crew and mission. This technology also stands to provide time and cost savings for future hardware platforms. Combined with the ability for industry and government agencies to enter into Space Act Agreements with NASA to use the SCaN Testbed on station, this development can advance space communications of today and tomorrow.