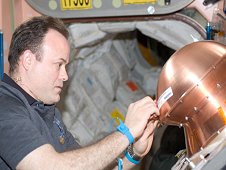 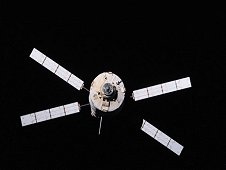 European Space Agency's Automated Transfer Vehicle-3 (ATV-3), "Edoardo Amaldi," begins its relative separation from the International Space Station during Expedition 33 on Sept. 28, 2012. The ATV-3 left orbit on Oct. 2 for a fiery re-entry over the Pacific Ocean that destroyed the trash-filled spacecraft carrying the ReEntry Breakup Recorder (REBR) inside. (NASA)
View large image When an aerospace engineer says breaking up is hard to do, they are not referring to matters of the heart. Instead, they are looking at best practices for the breakup of large items returning from space to Earth. Understanding what happens during this process is the goal of the ReEntry Breakup Recorder, or REBR. This device hitched a ride on the European Space Agency's Automated Transfer Vehicle-3, or ATV-3, as it departed the International Space Station and re-entered Earth's atmosphere on Oct 2, 2012.

A better grasp of large item breakups could help economize deorbit efforts by aiding engineers as they develop best practices for efficient and safe decommissioning. For some vehicles, such as the Russian Soyuz, this is not a problem -- they are designed to survive re-entry. One-time-use vehicles, however, have any remaining debris targeted for a harmless ocean splashdown. This is where REBR comes in. Think of it as a space vehicle "black box" in a copper shell that can help researchers to find out exactly what happens during re-entry.

In a recent interview, William Ailor, Ph.D. and principal investigator for REBR, spoke of the goals for this study. "What we’d like to know is at what altitude do things come apart? What is the heating? There's some evidence that models, at least prior to this time, have over predicted heating at higher altitudes, which means that you would predict that less survives than actually does," said Ailor. "So one of our objectives with this REBR experiment is to get some definitive data on how objects respond as they re-enter the atmosphere."

The space station crew attaches the REBR hardware to a re-entering vehicle prior to undocking. REBR then records real-time data from the point where the vehicle first senses the atmosphere to splashdown, as the unmanned cargo vessel burns up around it. After the host vehicle breaks apart and REBR releases, REBR makes something similar to a cell phone call to transmit data to a ground computer prior to impact.

The suite of sensors inside of REBR includes the following: a GPS receiver, temperature sensors, accelerometers and rate gyros, a pressure sensor, various electronics, an Iridium modem, a combination GPS/Iridium antenna, and batteries. The exterior shape of the device follows specifications developed by NASA's Langley Research Center that make the device self-stabilizing after release from its copper shell. NASA's Ames Research Center provided preliminary designs for the REBR heat shield and conducted wind tunnel tests to verify subsonic stability—important for successful transmission of recorded data.

Previous REBR experiments provided data when the Japan Aerospace Exploration Agency's H-II Transfer Vehicle, or HTV-2, and HTV-3 re-entered the atmosphere, with both vehicles breaking up over the Pacific Ocean. ATV-2 also included REBR hardware, but did not transfer information back. The cause of that data loss is thought to be an explosion of ATV-2 before REBR released from the vehicle.

There is also a safety element associated when large items return from space. "I would say the general rule of thumb is anything that weighs more than 800 kg is something that we would be concerned about, but it depends on what the components of the object are made of and their size and mass, as well," said Ailor. "Experience tells us that anywhere from 10% to 40% of an object's dry mass on orbit will survive to hit the ground, so that means that you have to have an object of sufficient size that has big enough surviving fragments to be a hazard."

Researchers hope to simplify re-entry trajectories for launch vehicles and satellites with their findings, as well as to engineer crafts to come apart in controlled ways -- what they call "design for demise." Experts can use the REBR data to design space hardware that is more predictable and safer when it re-enters. The knowledge gained from understanding how vehicles behave during atmospheric re-entry also means a more cost-effective spacecraft.

"One of the ways for removing space debris from orbit, or removing it as a long-term concern, is to re-enter it into the atmosphere," said Ailor. "There are basically two ways to re-enter things, one is to do it like we are doing it with the ATV-3, which is direct into the ocean, but that can be expensive for somebody who is operating a spacecraft. So if we can lower the hazard sufficiently for these large objects, they could be allowed to re-enter randomly and that reduces the cost substantially for spacecraft operators."

Another way engineers can improve vehicles is to ensure they disintegrate into less hazardous fragments, based on their design. Some may even be eligible for natural decay in orbit. This would mean the item could re-enter without the expensive propellants and operations associated with a controlled deorbit, reducing costs and prolonging the life of the vehicle.

REBR data will contribute to survivability models, as well, which help determine risk assessments and strategies for re-entry. This goes back to the design for demise, which can improve future exploration vehicle engineering, as well as protect people from breakups here on Earth -- though when it comes to breakups of the heart, humans are still on their own.