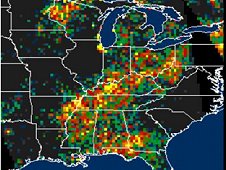 The above images, derived from NASA QuikScat satellite data, show the extensive pattern of rain water deposited by Hurricanes Katrina and Rita on land surfaces over several states in the southern and eastern United States. These results demonstrate the capability of satellite scatterometers to monitor changes in surface water on land. (NASA/JPL/QuikScat Science Team)
View large image Regular measurements of wind speed and direction at the ocean surface alert forecasters to threatening tropical storm conditions, while informing scientists of interactions between the atmosphere and sea currents that influence environmental conditions across the globe.

The observations are most effectively gathered from Earth orbit.

The U.S. lost that capability suddenly in late 2009, when the SeaWinds scatterometer aboard NASA's then 10-year-old QuikScat satellite experienced an age-related antenna failure.

While NASA and the National Oceanic and Atmospheric Administration assess the options for a long term replacement, the Jet Propulsion Laboratory, or JPL, and the International Space Station Program Office at the Johnson Space Center have mobilized to launch a replacement assembled from spare components left over from the development of QuikScat and ADEOS II.

"The ability for NASA to quickly reuse this hardware and launch it to the space station is a great example of a low-cost approach that will have high benefits to science and life here on Earth," said Mike Suffredini, NASA's International Space Station program manager.

"ISS-RapidScat represents a low cost approach to acquiring valuable wind vector data for improving global monitoring of hurricanes and other high intensity storms," said Howard Eisen, ISS-RapidScat project manager at JPL. "By leveraging the capabilities of the International Space Station and recycling left over hardware, we will acquire good science data at a fraction of the investment needed to launch a new satellite."

Planning was initiated at JPL by Robert Gaston, the QuikScat operations manager, and Ernesto Rodriguez, the ISS-RapidScat project scientist, to enlist the space station as a platform for a SeaWinds replacement and jelled in March 2012, following a series of science and cost assessments.

"From a forecaster's point of view, any sort of additional information you can get to help with hurricanes will be extremely useful," said Rodriguez.

ISS-RapidScat will play another important role by complementing scatterometers currently flying aboard the polar orbiting European Metop A and B and Indian OceanSat-2 satellites to gather data for climate models. Those models address subtle changes in El Nino, the warm Pacific Ocean equatorial current that influences weather across the U. S. Southwest, and other interactions between the sea and atmosphere that affect the polar ice masses and the world's rain forests.

While not in a polar orbit, the space station's high inclination trajectory will enable ISS-RapidScat to regularly cross the orbit tracks of its three companions and allow the NASA replacement to serve as an important calibration source.

The station's course will also take ISS-RapidScat over the Earth's surface at constantly changing times of day. Ocean winds are greatly influenced by solar radiation, which also varies with the time of day, trends that currently escape the notice of the European and Indian scatterometers that cross the same regions of the Earth at about the same local time each day.

"ISS-RapidScat will be a very useful instrument. By having something that makes all the instruments, which are slightly out of tune with each other, a better complement is extremely useful,” said Rodriguez. "We really require multiple decades of data in order to see some of the uncertainties relative to climate. It's key to have consistently cross calibrated, multi-decadal measurements."