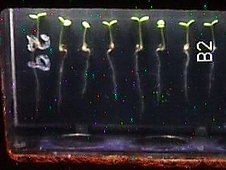 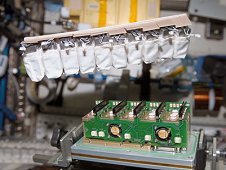 View of the TROPI seedling cassette for the European Modular Cultivation System, or EMCS, aboard the International Space Station Destiny laboratory module during Expedition 14. (NASA)
View large image Why is NASA conducting plant research aboard the International Space Station? Because during future long-duration missions, life in space may depend on it.

The ability of plants to provide a source of food and recycle carbon dioxide into breathable oxygen may prove critical for astronauts who will live in space for months at a time. In addition, plants provide a sense of well-being. At the McMurdo Station for research in Antarctica -- a site that in the dead of winter resembles the space station in its isolation, cramped quarters, and hostile environment -- the most sought after section of the habitat is the greenhouse.

NASA and the European Space Agency, or ESA, are studying how plants adapt to micro- and low-gravity environments in a series of experiments designed to determine the ability of vegetation to provide a complete, sustainable, dependable and economical means for human life support in space. As researchers continue to gain new knowledge of how plants grow and develop at a molecular level, this insight also may lead to significant advances in agriculture production on Earth.

Plant biology experiments on the space station using the European Modular Cultivation System, or EMCS, allow scientists to investigate plant growth and the processes within their cells to understand how plant life responds to conditions in space. Researchers currently are planning three new plant growth investigations specifically designed to examine the growth of seedlings in microgravity using this facility.

Combining the proposals of NASA Principal Investigator John Z. Kiss, and ESA Principal Investigator Javier Medina, the Seedling Growth investigation will continue at the space station for a series of experiments: Seedling Growth 1, 2 and 3 in 2013, 2014 and 2015 respectively. The results of these experiments will help researchers understand how plants sense and respond to the space environment.

Once aboard the space station, astronauts will conduct experiments to examine the seedlings' cultivation and stimulation under controlled temperature, atmosphere composition, limited water supply, illumination and acceleration conditions using centrifuges. Because the station crew is key to the success of the experiments, crew members will receive significant training, including on-board computer video instruction.

In 2010, the Tropi-2 experiment expanded on the knowledge gained from the first Tropi investigation. Collectively, the two studies demonstrated how red and blue light affects plant growth differently at varied levels of gravity. With this information, researchers now know that they can optimize plant root and shoot growth in space by fine-tuning the plants' exposure to light.

Most recently, the Plant Signaling space experiment, led by Principal Investigator Imara Perera, research associate professor at North Carolina State University, Raleigh, N. C., studied the roots and shoots of wild type and genetically modified Thale cress plant seedlings in microgravity and 1g -- a simulation of Earth's gravity. Images of the seedlings were sent to Earth before astronauts harvested and preserved the seedlings for post-flight analysis. The frozen plants are scheduled to return to Earth in 2013 aboard a SpaceX Dragon capsule.

The analysis of these data will lead to an understanding of the molecular mechanisms plants use to sense and respond to changes in their environment. Insights gained from this study will help scientists identify plants that are better able to withstand long duration spaceflight and microgravity conditions.

Unique Environments Demand Specialized Equipment
Provided by ESA, the EMCS consists of a holding structure filling four station lockers and includes an incubator with two centrifuges. Two to four Ames-developed Experiment Containers, or ECs, can mount to each of the two centrifuge rotors to allow scientists to perform experiments at various g-levels up to twice Earth's gravity, or 2g.

NASA's Ames Research Center worked closely with ESA to develop specific experimental units designed to grow plant seedlings, particularly Thale Cress, as well as other plant species. The hardware has performed flawlessly in supporting the Tropi-1, Tropi-2 and Plant Signaling experiments and will be used in the upcoming Seedling Growth study.