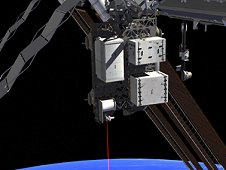 An artist's rendering shows the Optical Payload for Lasercomm Science, or OPALS, laser beaming down to Earth from the International Space Station. (NASA)
View large image 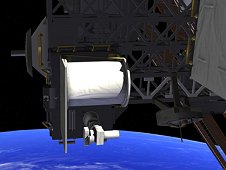 This artist's rendition of the Optical Payload for Lasercomm Science, or OPALS, hardware shows how it will look once attached to the International Space Station. (NASA)
View large image "OPALS" in space? Well, it's not the gemstones you may be thinking of. This "gem" is an acronym for Optical Payload for Lasercomm Science, or OPALS, an International Space Station experiment that has the potential to change the way data is transmitted from space to Earth.

Currently, spacecraft communicate and send data back to Earth through radio-frequency, much like your car radio. The OPALS investigation will test and demonstrate the use of optical communications. This emerging technology uses lasers to transmit data, and offers the potential promise of much higher return rates.

"The goal of optical communications technology is to increase the science data future missions can bring back for the same amount of resources," said Baris Erkmen, OPALS principal investigator at NASA's Jet Propulsion Laboratory in Pasadena, Calif. "In low Earth orbit, upcoming Earth science missions are generating more data at rates that are much higher than we are able to bring down now, and our investigation aims to improve NASA's ability to get more data down for scientists in the future."

OPALS will demonstrate and test optical communications technologies from a space-based platform by transferring video data via the laser hardware on the space station to a ground receiver at the Jet Propulsion Laboratory's Optical Communications Telescope Laboratory in Wrightwood, Calif.

"Using laser beams, which can be hundreds-to-thousands of times narrower than radio-frequency beams, allows us to achieve higher data rates," said Bogdan Oaida, the OPALS systems engineer at the Jet Propulsion Lab.

As the space station flies over, a laser beacon will transmit from the ground telescope to the payload, where an on-board camera system will track it. While maintaining a lock on the uplink beacon using a closed-loop control system and a two-axis gimbal, the OPALS flight system will downlink a modulated laser beam with a pre-encoded formatted video. "It’s like trying to use a laser to point to an area that's the diameter of a human hair from 20-to-30 feet away while moving at half-a-foot per second," added Oaida. "It’s all about the pointing."

Each demonstration lasts for approximately two minutes during which the station and ground telescope maintain line-of-sight. The OPALS instrumentation gathers technical data, which researchers then study to determine hardware performance, with the goal of improving the design of next-generation optical communications systems.

The OPALS hardware is targeted to launch to the space station in October 2013, and operate for 90 days. This investigation is part of the Jet Propulsion Laboratory Phaeton Early Career Employee Hands-on Training Program, which engages new scientists and engineers in ongoing, real-time investigations.