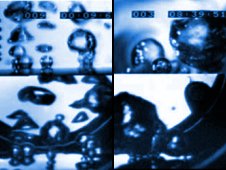 NPBX Experiment -- boiling at Earth normal gravity and low gravity. (NASA)
View large image It may seem illogical, but boiling is a very efficient way to cool engineering components and systems used in the extreme environments of space.

An experiment to gain a basic understanding of this phenomena launched to the International Space Station on space shuttle Discovery Feb. 24. The Nucleate Pool Boiling Experiment, or NPBX, is one of two experiments in the new Boiling eXperiment Facility, or BXF.

Nucleate boiling is bubble growth from a heated surface and the subsequent detachment of the bubble to a cooler surrounding liquid. As a result, these bubbles can efficiently transfer energy from the boiling surface into the surrounding fluid. This investigation provides an understanding of heat transfer and vapor removal processes that happen during nucleate boiling in microgravity. Researchers will glean information to better design and operate space systems that use boiling for efficient heat removal.

Bubbles in microgravity grow to different sizes than on Earth. This experiment will focus on the dynamics of single and multiple bubbles and the associated heat transfer.

NPBX uses a polished aluminum wafer, powered by heaters bonded to its backside, and five fabricated cavities that can be controlled individually. The experiment will study single and/or multiple bubbles generated at these cavities. It will measure the power supplied to each heater group, and cameras will record the bubble dynamics. Analysis of the heater power data and recorded images will allow investigators to determine how bubble dynamics and heat transfer differ in microgravity.

"With boiling, the size and weight of heat exchange equipment used in space systems can be significantly reduced," said Vijay Dhir, the experiment's principal investigator at the University of California, Los Angeles. "Boiling and multiphase heat transfer is an enabling technology for space exploration missions including storage and handling of cryogenic, or extremely low temperature liquids, life support systems, power generation and thermal management."

"The cost of transporting equipment to space depends on the size and weight of the equipment," added David Chao, the project scientist from NASA's Glenn Research Center in Cleveland. "The knowledge base that will be developed through the experiment will give us the capability to achieve cooling of various components and systems used in space in an efficient manner and could lead to smaller and lighter spacecraft."
by Lori Meggs
International Space Station Program Science Office
NASA's Marshall Space Flight Center