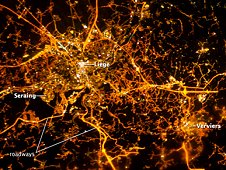 This image taken on Dec. 8, 2012, with the European Space Agency, or ESA, NightPod camera mount, shows the city of Liège, Belgium, as it appears at night from the vantage point of the International Space Station. (ESA/NASA)
View large image 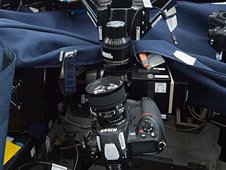 View of the European Space Agency, or ESA, NightPod hardware in the Cupola Module of the International Space Station. (NASA)
View large image There is a reason the phrase "shooting in the dark" refers to things that are difficult to do -- and night photography is no exception. To account for low-light image scenarios, a photographer needs a steady tripod, but aboard the International Space Station, a traditional tripod isn't going to cut it. Thankfully, the European Space Agency, or ESA, developed NightPod for the crew's cameras.

This astronaut photograph of Liège, Belgium, at night was taken using the NightPod camera mount aboard the space station. The mechanism allows astronauts to capture images of the Earth at night with greater clarity and control than previously possible from orbit.

"The challenges of low-light photography from orbit -- for example, the likelihood of blurry images because of the ground motion -- have always frustrated astronauts," said Cynthia Evans, International Space Station associate program scientist for Earth Observations. "Over the years, astronauts have experimented with different solutions, including high-speed films and manual tracking to compensate for the ground motion. The NightPod camera mount allows the crew to successfully track the Earth using low-light camera settings."

The crew enters the station's orbit and attitude into NightPod, enabling the instrument to automatically track a specific location on the ground and keep the target in frame for optimal focus. Since the system can be set to run automated for up to six hours, the crew can literally take pictures in their sleep.

To get an idea of just how clear images using NightPod are, look at how detailed the brightly lit core of the Liège urban area appears. It lies at the center of a network of roadways -- traceable by continuous orange lighting extending out into the rural and relatively dark Belgian countryside. For a sense of scale, the distance from image left to right is approximately 43 miles (70 kilometers). The region to the southeast of Verviers includes agricultural fields and forest; hence, it appears almost uniformly dark at night.

The image of Liège was acquired on Dec. 8, 2012, with a Nikon D3S digital camera using a 180 millimeter lens and the NightPod, and is provided by CEO investigators and the Image Science and Analysis Laboratory at Johnson Space Center. The image was taken by the Expedition 34 crew. It was cropped and enhanced to improve contrast, and lens artifacts were removed.

Installation of NightPod was completed on Feb. 24, 2012, by astronaut André Kuipers, and some of the earliest images appear in this ESA story. The primary goal of NightPod is to take high-resolution, long-exposure digital imagery of the planet from the station's Cupola, particularly cities at night. Other scenarios of interest include evening observations of brush fires, visual analysis of maritime and road traffic, volcano activity, urban pollution, squid fishing and day/night transitions.

While the official NightPod mission is done, the mechanism remains on station for astronauts to use as part of the Crew Earth Observations, or CEO, investigation. For CEO, the astronauts photograph natural and human-made events on Earth from the orbiting lab. The images record the ground's surface changes over time, atmospheric phenomena like aurora and polar mesospheric clouds, and dynamic happenings such as storms, floods, fires and volcanic eruptions. Together with automated remote sensing systems on the space station, handheld camera imagery provides researchers with data to understand the planet from an orbital perspective.

The International Space Station Program supports the imaging laboratory as part of the U.S. National Lab to help astronauts take pictures of Earth that will be of the greatest value to scientists and the public, and to make those photographs freely available on the Internet. Additional images taken by astronauts and cosmonauts can be viewed at the NASA/JSC Gateway to Astronaut Photography of Earth.