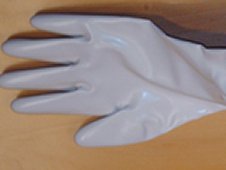 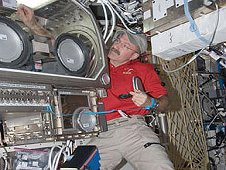 Expedition 30 Commander Dan Burbank works with hardware inside the Microgravity Science Glovebox aboard the International Space Station. (NASA)
View large image Marking the 10th anniversary of an achievement is a proud occasion. And when it's marked in space, some believe it's even more of an achievement. That's not lost on the hundreds of researchers, astronauts and operational engineers who have had their "hands" in the Microgravity Science Glovebox on the International Space Station.

The glovebox, also known as MSG, is sealed and at negative pressure, so astronauts can manipulate experiment hardware and samples without the risk of small parts, particulates, fluids or gasses escaping into the open. It offers a 9-cubic-foot work area accessible to the space station crew through glove ports, and to ground-based scientists through real-time data links and video.

Located in the U.S. laboratory, this facility allows crew members to participate in the assembly and operation of investigations in space similar to laboratories here on Earth. The glovebox performed its first operations activity during Expedition 5 on July 1, 2002.

"Starting with Peggy Whitson on Expedition 5 and running through our current crew, MSG has been extremely fortunate to have people of tremendous drive and passion perform our science experiments," said Lee Jordan, project manager for the MSG at NASA's Marshall Space Flight Center in Huntsville, Ala. "MSG's 10-year road has been lined with scientific milestones and accomplishments that have added to human knowledge and emphasized the continued need for space science and exploration."

In the more than 12,000 hours it has been used aboard the station, the glovebox has handled its share of research. Twenty-four different experiments ranging from materials science to fluid physics to combustion and more have been performed.

Among the 24 investigations, here are some highlights:
CSLM-2 -- Coarsening in Solid Liquid Mixtures-2 is a materials science experiment designed to study the rate at which particles of tin suspended in a liquid comprised of molten tin/lead alloy increase in size; a process called coarsening. During this process, small particles shrink by losing atoms to larger particles, causing the larger particles to grow, or coarsen, within a liquid lead/tin matrix. CSLM-2 takes advantage of the microgravity environment on the space station, in which there is no sedimentation or convection to influence coarsening. This study defines the mechanisms and rates of coarsening that govern similar processes that occur in materials made on Earth, such as turbine blades, dental amalgam fillings, aluminum alloys, etc. On Earth, these materials contain pores created and trapped during solidification, and these pores cause a distinct weakening in the overall structure of the cast product. Investigations such as CSLM-2 may lead to the development of improved manufacturing processes for commercially important materials.

BASS -- Burning and Suppression of Solids examines the burning and extinction characteristics of a wide variety of fuel samples in microgravity. The BASS experiment will guide strategies for extinguishing accidental fires in microgravity. BASS results contribute to the combustion computational models used in the design of fire detection and suppression systems in microgravity and on Earth.

InSPACE -- Investigating the Structure of Paramagnetic Aggregates from Colloidal Emulsions is a microgravity fluid physics experiment to obtain fundamental data of the complex properties of an exciting class of smart materials called magnetorheological (MR) fluids. MR fluids are suspensions of very small (micron-sized) magnetic particles in a nonmagnetic medium. These controllable fluids can quickly transition into a nearly solidlike state when exposed to a magnetic field and return to their original liquid state when the magnetic field is removed. The microgravity environment that is provided on the space station eliminates the effects of sedimentation on the particles and thus the integrity of the fluid. By understanding the complex properties of these fluids and learning the way the particles interact, scientists can develop more sophisticated methods for controlling these fluids and using them in a variety of devices such as new brake systems, seat suspensions, robotics, clutches, airplane landing gear, and vibration damping systems.

The glovebox's provisions have made it accommodating to both crew-intensive science operations and autonomous, ground-operated investigations, keeping it an active participant on the station's dynamic, payload timeline. As the glovebox team celebrates 10 years of operations, it looks to a future that promises new and exciting research. Although it was originally slated to come home in 2012, the glovebox now looks to 2020 and beyond to support science on the station.

While the glovebox has predominantly supported materials science-type payloads, the addition of biological/life science payloads to the list of investigations has created a stir of change and excitement for the future. The Microgravity Science Glovebox project at the Marshall Center is developing Life Science Ancillary Hardware, or LSAH, and a new video drawer to accommodate the addition of life science payloads to the glovebox manifest.

The updated hardware will feature new filters, gloves and a UV decontamination system to support life science investigations within the glovebox environment. The new video system will feature high-definition cameras and monitors, high frame-rate cameras, and digital video storage. Both sets of hardware should be ready for flight in the fall of 2013.

The glovebox was developed by the European Space Agency and is managed by the Marshall Center. "The efficiency of the Microgravity Science Glovebox has been an invaluable asset to research on the station," said Martin Zell, responsible for space station utilization for the European Space Agency. "Our cooperation with NASA on this project has worked seamlessly over the past 10 years to facilitate hundreds of experiment runs, leading to excellent scientific results that are of importance here on Earth."