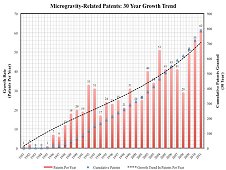 This chart shows the upward trend of Microgravity-related patents over 30 years, as related to the International Space Station. (Uhran)
View large image 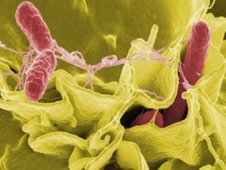 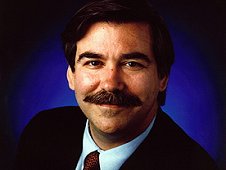 Mark Uhran, former NASA Director, International Space Station Division Human Exploration and Operations Mission Directorate. (NASA)
View large image They say that necessity is the mother of invention, so when humans decided to build and inhabit a laboratory in the harsh environment of space, it was only natural that innovations would follow. The creators of these developments sought patents to protect their intellectual property, giving a way to gauge microgravity advancements. The recently published paper, "Microgravity-Related Patent History," by Mark Uhran, looks back at the more than 818 patents granted since 1981, as related to the term "microgravity."

Uhran, former NASA director, International Space Station Division Human Exploration and Operations Mission Directorate, points out that the use of patents as an indicator of value creation signifies economic potential. In addition to the granted patents, he cites an additional 580 applications filed with the U.S. Patent and Trademark Office during the last decade. There are undoubtedly station-related patents, according to Uhran, that do not include the term of microgravity. This means an even greater likelihood of additional innovations beyond those counted in his paper.

"Microgravity processing research is coming of age in much the same way that vacuum processing did at the close of the 19th century," said Uhran. "From vacuum technologies, the 20th century industrial revolution in microelectronics was born, and from microgravity technologies I predict a 21st century revolution in microbiotics that will dramatically change our approach to human health care and food production."

Developments based on microgravity investigations and exploration create compelling competition between agencies, scientists and engineers. This includes both research and technology developments, as seen in both cooperative and parallel projects that may lead to benefits for humanity.

"The fields of molecular and cellular biotechnology have already demonstrated the competitive advantages of microgravity environments," said Uhran.

The top seven patent categories include the following: biotechnologies (36%), instrumentation/analytical (13%), materials (12%), aerospace components (12%), and systems in the areas of thermal, measurement, and human health (4% each).

Macromolecular crystal growth and studies on bacterial pathogens in microgravity both show the potential from research aboard the space station to yield simultaneous beneficial developments for human health and global economies. "From the independent work of DeLucas, McPherson and Urade, we know that space is an effective tool for solving the structure of important biological macromolecules," said Uhran. "Nickerson and Hammond have both made competitive progress toward producing vaccines and therapeutics for bacterial pathogens."

While initially the U.S. government dominated microgravity-related patents, the area of industrial submissions quickly gained ground, with a continued growth that surpassed government, individual investigators and academia. These various sectors, Uhran asserts, are codependent. "The government role is to bridge the two [industry and academia] and demonstrate promise by underwriting long lead-time basic research, and proofs-of-concept for applications."

The grouping of the patent categories reveals the relationships inherent in knowledge growth and technological development. "In some cases, it's a scientific finding that enables the innovation of a new process or product on the ground that was never previously achievable," said Uhran. "In other cases, the process or product must function in the microgravity environment in order to yield an outcome that's not possible to duplicate on the ground under any conditions. Finally, a share of these patents are for products or processes that are needed to live and work in a microgravity environment."

Uhran concludes in his paper that his findings are merely the "tip of the proverbial iceberg." With the space station now at full utilization, he expects patents to grow rapidly, an indicator of advancing benefits on Earth and for future space exploration.

"Nothing could be more rewarding than to complete the International Space Station and meet all of the mission performance requirements we set back at the 1993 Critical Design Review," said Uhran. "We now have the laboratories we need, so what remains is a matter of political will and classic research portfolio management practices to capitalize on this incredible national asset."