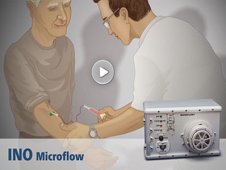 Microflow uses unique fiber optics technology to detect cells in small quantities of liquid. The portable, technology could offer near real-time medical diagnosis for astronauts in space, people in remote communities or in areas affected by natural disasters where medical equipment is not readily available. (National Optics Institute)
View large image In the movie Iron Man 2, billionaire-turned-super-hero Tony Stark uses a pocket device to measure his toxicity levels caused by the fictional reactor core in his chest that gives him super-powers.

In this Hollywood vision, the test results come back instantly (of course) and are immediately transferred to a vast database that helps Stark find a cure.

In real-life, such instantaneous personal medical technology doesn't exist yet. But soon, a new device the Canadian Space Agency (CSA) will be testing on the International Space Station (ISS) could pave the way for just such a gadget--one able to offer real-time analysis of everything from infections, to stress, blood cells, cancer markers, and could even be used to test food-quality levels here on Earth.

Meet Microflow
The device--called Microflow--is a miniaturized version of a flow cytometer (a common research or clinical laboratory instrument used for a range of bioanalysis and clinical diagnoses). Microflow can spot cells and biological molecules rapidly by using optical fiber-optic technology to detect them in a sample of liquid as they pass single-file in front of a laser--all within 10 minutes.

Different detectors positioned at the point where the stream meets the laser can analyze the physical and chemical properties of molecules or cells in the sample.

Unlike most current flow cytometers (which are used only in labs because they can weigh hundreds of pounds and take up as much space as three laser printers and an espresso machine), Microflow weighs less than 22 lb (10 kg) and takes up about the same space as a toaster. Microflow's small size and light-weight make it ideally suited for use in space, since it costs much more to launch heavier objects into space, and bulky objects are more difficult to stow aboard sleek spacecraft and the ISS.

Making it micro
Miniaturizing flow cytometer technology, and making it work in space, required the Quebec City-based National Optics Institute External (INO) to find a way to keep the fluid stream small and from becoming unfocused in weightlessness.

Led by principle investigators Dr Ozzy Mermut from INO and Dr Luchino Cohen from the CSA, the Microflow team built a device that suspends particles in just a tiny amount of liquid inside a small fiber-optic structure that is permanently focused. Once the particles are detected in this structure, the device transfers the collected data to a USB key for analysis.

Uses in space
Microflow will be put to the test on the ISS during CSA Astronaut Chris Hadfield's six-month mission. If the technology proves successful in space, it could revolutionize how astronauts are able to diagnose and treat themselves and others throughout long-duration missions by allowing the crew to test for medical conditions without having to send samples back to Earth for analysis.

Uses on Earth
On Earth, Microflow could allow people in remote communities to be tested quickly for things like infectious disease, thereby reducing healthcare costs and putting hospital-level care into the hands of more Canadians. It might also help reduce travel for medical analysis by testing people in their home communities. The technology could also allow food and agricultural processing plants to run on-site quality-control inspections and tests.


This story was written and published by the Canadian Space Agency. For information on original posting, please visit: http://www.asc-csa.gc.ca/eng/sciences/microflow.asp