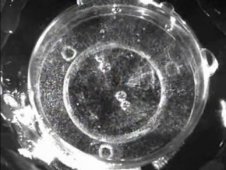 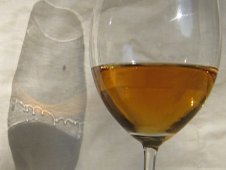 Shadow reflection shows "tears" in a glass of wine. (Wikipedia Commons)
View large image What do a wine glass on Earth and an International Space Station experiment have in common? Well, observing the wine glass would be one of few ways to see and understand the experiment being performed in space.

Ever heard someone say their wine has "legs" or "tears of wine?"

Wine legs or tears of wine is a phenomenon manifested as a ring of clear liquid that forms near the top of a glass above the surface of wine. The drops continuously form and fall in rivulets back into the liquid. One factor in the way fluid moves is called Marangoni convection, or flow, and Japan Aerospace Exploration Agency researchers are very interested in studying it in a gravity-free environment.

Marangoni convection is the tendency for heat and mass to travel to areas of higher surface tension within a liquid. Surface tension is a property of a liquid that causes the surface portion of liquid to be attracted to another surface, such as a drop of mercury that forms a cohesive ball in a thermometer or droplets of water on a well-waxed car. This phenomenon is named after Italian physicist Carlo Marangoni who first studied the phenomenon in the 19th century.

"We are clarifying an unknown phenomenon and that’s very exciting," said Satoshi Matsumoto, a Marangoni science coordinator from the Japan Aerospace Exploration Agency. "Marangoni negatively affects the quality of crystal growth such as semiconductors, optical materials or bio technology materials. The convection also occurs in a heat pipe for heat radiation devices in personal computers, and degrades the radiation performance. Therefore, increased understanding of Marangoni convection not only expands our knowledge of fluid behavior, but also has great significance for production of semiconductor materials and equipment development for both space and ground use."

JAXA has been promoting four Marangoni experiments to fully understand a surface-tension-driven flow in microgravity. It will complete in 2015.

To study how heat and mass move within a fluid in microgravity, investigators are using a larger bridge of silicone oil between two discs. On Earth, that bridge couldn't exist. One of the primary ways heat is transferred on Earth is by buoyancy, where warm air rises and cold air sinks. In space, there is no buoyancy. So investigators heat one disc higher than the other to induce Marangoni convection in that bridge of silicone oil. They are looking at patterns of how fluids move to learn more about how heat is transferred in microgravity.