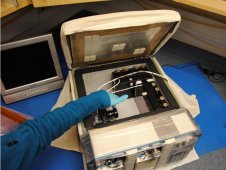 The YouTube Space Lab Salticus scenicus investigation and camera loaded inside BioServe's Commercial Generic Bioprocessing Apparatus. Pictured prior to launching to the International Space Station, the two black-topped boxes inside are the spider habitats. Only one spider habitat is in front of the camera at a time. (BioServe)
View large image 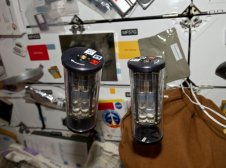 The B. subtilis investigation uses Group Activation Packs (GAPs), similar to those shown above, to grow the bacteria. This photo is from a previous experiment, NLP-Vaccine 11, performed during shuttle mission STS-133. (BioServe)
View large image 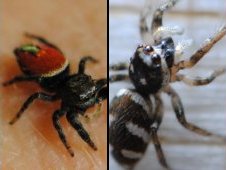 Dorothy Chen and Sara Ma (from Troy, Mich.) and Amr Mohamed (from Alexandria, Egypt) won this opportunity to do research in the orbiting laboratory's microgravity environment -- while attending high school.

These young scientists are working on some interesting hypotheses involving jumping spiders' adaptation abilities, and how microgravity might affect the anti-fungal properties of Bacillus subtilis (also known as B. subtilis), which are naturally occurring bacteria.

Astronaut Sunita Williams, NASA flight engineer, is conducting the investigations aboard the station. The student experiments are scheduled to stream live via video from the space station on the YouTube Space Lab website Sept. 13, at 9:30 a.m. CDT.

Mohamed's Salticus scenicus, or zebra spider, research looks at whether jumping spiders, like the zebra and red-backed species, can adapt their hunting abilities to microgravity. Jumping spiders do not build webs for catching their food. These particular spiders hunt using their excellent vision to track and stalk prey, jumping and striking with a lethal bite -- similar to cats hunting mice.

"I have always been fascinated by science because with a handful of equations, I can explain the world around me," said Mohamed in his Meet the Winner YouTube video. "The idea of sending an experiment to space is the most exciting thing that I have ever heard in my life."

Chen and Ma were inspired by previous Salmonella studies done aboard station, proving this type of bacteria grown in microgravity becomes more virulent. They are testing this theory on B. subtilis, to see if these bacteria will have increased anti-fungal properties when compared to the same bacteria produced on Earth. Their testing procedures involve introducing various nutrients and compounds, in particular phosphates and nitrates, separately to see if these additives affect growth and anti-fungal potency. If their hypothesis is correct, results may lead to stronger probiotics (as B. subtilis is highly stable in harsh environmental conditions), and increased knowledge concerning how bacteria cause disease.

In their Meet the Winners YouTube video, Ma said, “When we first started brainstorming, we definitely wanted to do something to impact the human race. It’s so cool how with science, everything relates to each other. Physics is used in chemistry, and chemistry is used in biology, and so on; everything is interrelated and it’s just really neat to find those relations.” Chen added, “The idea that something you made, something that’s your experiment, being sent up into space and actually becoming a reality is pretty incredible.”

Using the excitement of space and the thrill of having an experiment publicly conducted on the space station, exposes hundreds of thousands -- if not millions -- of students worldwide to the concept of research in microgravity, using the unique scientific platform of the space station.

The U.S. segment of the space station was designated as a national laboratory in 2005. NASA Deputy Administrator Lori Garver said, "As a national laboratory, our goal is to open up the space station to new paths for the exploration, discovery and economic development of space. Educating and inspiring the next generation of space explorers and scientists are among the most important things NASA can do, and these students are getting the opportunity of a lifetime. A contest like this taps into the passion of so many people who get involved, from the just over 2,000 students who submitted proposals to everyone who voted for them, and we want to encourage that passion and engagement."

The world-wide contest for students 14 to 18 years old called for students to submit entries via a two-minute YouTube video in the areas of physics or biology. There were over 2,000 entries received from more than 80 countries around the world.

“Competitions like YouTube Space Lab will inspire millions of people to explore and be curious about the world,” said Mohamed.