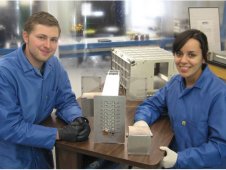 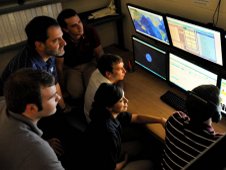 Meetra Torabi and others on console. (Credit: Jason Rexroat)
View large image The results are in! For the first university student-run experiment on the International Space Station NanoRacks-CubeLabs facility, that is. Using funding from the National Space Grant College and Fellowship Program and Kentucky Space -- a consortium of state universities throughout Kentucky managed by the non-profit Kentucky Science and Technology Corporation -- the University of Kentucky charts the way for university students to perform experiments on the International Space Station.

The Space Grant uses a national network of colleges and universities to provide fellowships and scholarships to support students pursuing careers in science, mathematics, engineering and technology. The program reaches students in all 50 states, the District of Columbia, and the Commonwealth of Puerto Rico. The University of Kentucky tapped this unique resource to education to stimulate interest and motivate their science and math majors.

Combining real world experience with education goals, students engaged in applied sciences with meaningful results via their microgravity investigation project. The university partnered with NanoRacks, a private company that provides research opportunities on the space station through the International Space Station National Laboratory. The plug-and-play nature of the NanoRacks-CubeLabs allows for interested parties, such as universities or commercial companies, to fly small and relatively inexpensive payloads aboard the station. This enables microgravity research for those who may not otherwise have had the opportunity.

The exciting nature of working with the space station garnered immediate notice among students at the university. Meetra Torabi, who is pursuing an MS in Electrical Engineering, worked on the electrical board for the NanoRack-CubeLabs frame. This was the intended extent of her participation, but she was inspired to continue working with the project afterwards and joined the operations team. "I knew it was a project I wanted to stay a part of…the excitement stemmed from working on space hardware and later operation in real time was unlike any other event in my educational career."

Torabi's fellow operations teammate, Jason Rexroat, echoed the importance of microgravity studies as an educational stimulant. "Conducting research without [gravitational] constraint is exciting for me because the possibilities are endless; this whole new world of reactions and adaptation may very well uncover mysteries about cancer and disease development, and make Earthly processes more efficient. I want to be part of that cycle of discovery."

The student team works in the University of Kentucky Space Systems Lab, part of the Department of Electrical and Computer Engineering. The team supports payload integration and manages real-time operations aboard the space station for their NanoRacks-CubeLab investigation. The goal of the student-built experiments is to study the effects of radiation on electronics aboard the station. The team specifically focused on flash-based mass storage devices, using modules 1 to 4 of the NanoRacks-CubeLabs.

The first student results were presented on October 14, 2010, at the National Space Grant Director's Meeting in Portland, ME. The design of the experiments measures the effects of single event upsets over various duration flights aboard the space station. The first module returned to Earth on STS-132; the other three are scheduled to return on STS-133 and STS-134. This allows the team to compare the radiation effects over varying exposure times. Radiation events are common in space and are a concern for electronic devices, as well as astronaut health and space vehicle stability. The University of Kentucky initial test was successful in showing no alteration or errors in the data collection due to radiation.
by Jessica Nimon, International Space Station Program Science Office
NASA's Johnson Space Center