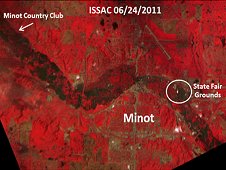 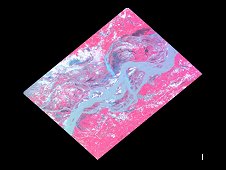 The image above was acquired on September 9, 2012 and shows flooding along the Indus River approximately 23 km northwest of Akramabad, Punjab, Pakistan. The image is rotated to have north at the top. (UND UMAC)
View large image They say a picture is worth a thousand words, but in the case of cameras aboard the International Space Station, a picture may impact a thousand lives or more. The International Space Station Agricultural Camera, or ISSAC, provides images capable of important impacts for Earth users. Originally meant as an agricultural resource, ISSAC completed its primary science operations in September, but now answers the call for disaster response on a global level.

ISSAC launched to the space station in January 2011. Since June 2011, it has operated as a tool for improved geographic stewardship. Beginning in the spring of 2012, the camera joined disaster relief resources as one of multiple space station assets available to provide images at the request of the International Disaster Charter, or IDC.

Participants in this charter collect images on a "best-effort" basis of areas impacted by natural disasters. Orbital remote sensing systems, maintained by several participating space agencies, capture the images and the data are made available to appropriate organizations in the impacted regions. Responders on the ground can use this data to generate resources, such as near real-time fire and flood maps.

The primary purpose of ISSAC was to help farmers and ranchers in the upper U.S. Midwest improve their agricultural production, while minimizing impact on the environment. ISSAC uses a multi-spectral camera that resides in the space station's Window Observational Research Facility, or WORF.

The camera's ability to identify healthy plant life has to do with the equipment's multispectral sensors, which use both visible and infrared light to capture Earth images. ISSAC has a single 150 mm lens and optical beam splitter that separates the light into red, green, and near infrared light band passes, each going to one of three separate internal digital cameras. Of these, the red and near infrared bands are particularly useful when studying vegetation.

Plant life is highly absorptive of the red band and reflective in the near-infrared band. When researchers on the ground combine this data into a Normalized Difference Vegetation Index, the results indicate any reductions in plant health. A decrease in the near-infrared band can indicate heat or drought stress on crops, while an increase in red band reflectance points to reduced chlorophyll production. Once taken, ISSAC images were downlinked to the ground where they were processed for delivery to end users in a matter of days.

Farmers can use ISSAC data from the previous growing season to help make more effective use of fertilizers and other chemicals, reducing environmental impacts. Ranchers can request similar data to avoid ecosystem damage from erosion and livestock overgrazing of rangelands. In addition, researchers may use ISSAC to see if frequent multi-spectral imagery could help map nitrogen content in plant biomass, among other research application investigations.

ISSAC had planned to offer frequent data collection and improved image resolution for specific geographic area requests. This capacity for rapid data production, with multi-week to multi-day imaging, would be a supplement to other sun-synchronous orbiting cameras, such as Landsat. In November 2011, however, the pointing system for ISSAC stopped working. Although this significantly reduced the rapid-response capability, the camera could still take images in a nadir-pointing mode, or straight down towards Earth while over a given location.

ISSAC's vantage point on the space station also makes it ideal to help monitor natural disasters, providing a valuable secondary resource application. An example of this can be seen in the image taken of Minot, N.D., when the area suffered record flooding in the summer of 2011. In the ISSAC image of the Minot flooding, the three color bands—green, red, and near-infrared—are assigned respectively to blue, green, and red colors. Vegetation appears red, with brighter shades indicating more plant life.

"Standing water looks black, since it reflects almost nothing in the near-infrared, and the Souris River Valley is visible as a dark strip in the image. As you can see, during this flood the river is more than a mile wide; when it is not flooding, it is just a few yards wide," said Olsen.

Since the space station resources were added to the IDC, there have been 25 activations. To date ISSAC was able to respond to seven of these: fires in northern Algeria, an earthquake in Iran, flooding in Pakistan, flooding in Nigeria, flooding in Cameroon, and damage from Hurricane Sandy in Haiti, as well as data collection along the upper U.S. eastern coastline following the storm.

"The ISSAC images are being added to the main data directory of the USGS [U.S. Geological Survey] Hazards Data Distribution System (HDDS), which will make them directly available to end-users in countries that have requested data through the IDC," said Will Stefanov, senior remote sensing specialist with NASA's International Space Station Program Science Office.

"We have wildly exceeded our expectations from an academic outcome perspective," said Olsen. "More than 70 students have now worked on ISSAC in some way or another, including completion of 15 graduate-level theses/independent study projects."

ISSAC is planned to continue to operate through January 2013 when a new imaging device, the ISS SERVIR Environmental Research and Visualization System, or ISERV, will swap places with the camera at the station's WORF.

"Operations will be limited to assisting with monitoring of any natural disasters that may occur during that time," said Olsen "ISSAC has already been serving in this capacity as a secondary science objective since last January. Along with other end-of-mission activities, ISSAC will continue to perform such operations as needed for this secondary science mission."