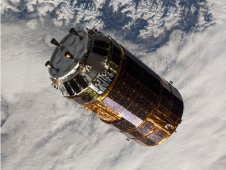 Backdropped by a cloud-covered part of Earth, the unpiloted Japanese Kounotori2 H-II Transfer Vehicle, or HTV2, approaches the International Space Station. The Japan Aerospace Exploration Agency, or JAXA, launched HTV2 aboard an H-IIB rocket from the Tanegashima Space Center in southern Japan at 12:37 a.m. EST; Jan. 22, 2011. HTV2 is the second unpiloted cargo ship launched by JAXA to the station and delivered more than four tons of food and supplies to the space station and its crew members. (NASA)
View large image 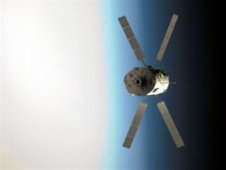 Backdropped by the airglow of Earth's horizon and the blackness of space, the Jules Verne Automated Transfer Vehicle, or ATV, approaches the International Space Station on Monday, March 31, 2008, for its "Demo Day 2" practice maneuvers. It moved to within 36 feet of the Zvezda Service Module in a rehearsal for its ultimate docking April 3, 2008. (NASA)
View large image 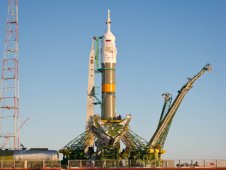 The Soyuz TMA-03M spacecraft is seen at the launch pad after being raised into vertical position on Dec. 19, 2011 at the Baikonur Cosmodrome in Kazakhstan. The launch of the Soyuz spacecraft with Expedition 30 Soyuz Commander Oleg Kononenko of Russia, NASA astronaut and Flight Engineer Don Pettit and European Space Agency astronaut and Flight Engineer Andre Kuipers was at 7:16 p.m. (Kazakhstan time) on Dec. 21. (NASA/Carla Cioffi)
View large image The pace of research aboard the International Space Station is accelerating, even though the space shuttles used to build it have been retired. The shuttles' huge cargo carrying capacity was needed to build the space station, but for daily use the United States and its international partners have a variety of vehicles to get research materials and equipment to and from the station.

Part of this international effort also involves commercial providers in various stages of their vehicle's completion, which are being contracted by NASA to both deliver cargo to the station, and to return research samples to the Earth.

Currently, all astronauts are launched aboard the Russian Federal Space Agency, or Roscosmos, Soyuz vehicle for transport to and from the station. Roscosmos also provides the Progress unmanned cargo resupply ships that deliver supplies to the orbiting outpost. Both vehicles use automated systems to dock to the station. The Soyuz returns the crew and a limited amount of cargo home, while the Progress -- filled with trash -- burns up upon re-entry to the Earth's atmosphere.

Two commercial resupply service providers are projected to complete flight demonstration capabilities and make deliveries to the station in 2012. Both spacecraft will use the station's common berthing mechanism ports that provide shirtsleeve conditions and large passageways for cargo transfers into the station. Both vehicles require berthing to the station, after capture with the station's robotic arm.

SpaceX's Dragon spacecraft is currently contracted to complete 12 missions. Late April 2012 is targeted as the new launch date for the second demonstration flight to the space station, with the vehicle to be berthed upon arrival. Test cargo will be transferred and returned on the demo flight.

Orbital's Cygnus vehicle is contracted to provide eight missions between 2012-2015, and will be berthed to the station. Approximately 44,092 pounds (20,000 kilograms) of cargo is planned for delivery to the station, along with disposal of station trash upon the vehicle's re-entry. Cygnus' pressurized cargo module is based on the station's Multi-Purpose Logistics Module, also known as the MPLM. Orbital Sciences Corp. created an informative animated video showing a Cygnus station cargo delivery mission.

Space station assembly is now complete, and there are many research facilities in place to continue not only what is currently being done, but expand and do even more investigations. The U.S. and its partners have supported a continuous presence on the station for the past 11 years, and the laboratory is expected to operate at least through 2020.