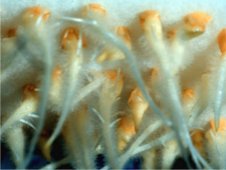 Cucumber roots grew laterally in space following 70 hours in microgravity on STS 95. (JAXA) Plants are fundamental to life on Earth, converting light and carbon dioxide into food and oxygen. Plant growth may be an important part of human survival in exploring space, as well. Gardening in space has been part of the International Space Station from the beginning -- whether peas grown in the Lada greenhouse or experiments in the Biomass Production System. The space station offers unique opportunities to study plant growth and gravity, something that cannot be done on Earth.

The latest experiment that has astronauts putting their green thumbs to the test is Hydrotropism and Auxin-Inducible Gene expression in Roots Grown Under Microgravity Conditions, known as HydroTropi. Operations were conducted October 18-21, 2010. HydroTropi is a Japan Aerospace Exploration Agency (JAXA)-run study that looks at directional root growth. In microgravity, roots grow latterly or sideways, instead of up and down like they do under Earth’s gravitational forces.

Using cucumber plants (scientific name Cucumis sativus), investigators look to determine whether hydrotropic -- plant root orientation due to water—response can control the direction of root growth in microgravity. To perform the HydroTropi experiment, astronauts transport the cucumber seeds from Earth to the space station and then coax them into growth. The seeds, which reside in Hydrotropism chambers, undergo 18 hours of incubation in a Cell Biology Experiment Facility or CBEF. Then the crewmembers activate the seeds with water or a saturated salt solution, followed by a second application of water 4 to 5 hours later. The crew harvests the cucumber seedlings and preserves them using fixation tubes called Kenney Space Center Fixation Tubes or KFTs, which then store in one of the station MELFI freezers to await return to Earth.

The results from HydroTropi, which returns to Earth on STS-133, will help investigators to better understand how plants grow and develop at a molecular level. The experiment will demonstrate a plant’s ability to change growth direction in response to gravity (gravitropism) vs. directional growth in response to water (hydrotropism). By looking at the reaction of the plants to the stimuli and the resulting response of differential auxin -- the compound regulating the growth of plants -- investigators will learn about plants inducible gene expression. In space, investigators hope HydroTropi will show them how to control directional root growth by using the hydrotropism stimulus; this knowledge may also lead to significant advancements in agriculture production on Earth.