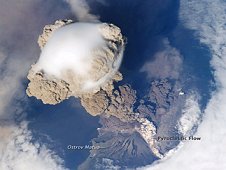 One of the areas the International Space Station Benefits for Humanity website will highlight is Earth observations, which aid in providing information for disaster response from natural events, like the Sarychev Peak volcano eruption pictured above. (NASA)
View large image 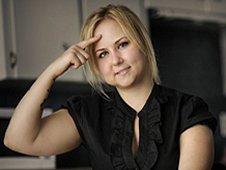 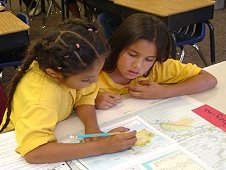 So just what has the space station yielded to humankind? You can discover the benefits for yourself, thanks to another international collaborative effort. Working together, the station partners launched the International Space Station Benefits for Humanity website on March 1. This site enables readers to look at the global progress resulting from the knowledge and technologies of the orbiting laboratory.

Camille Alleyne, International Space Station assistant program scientist with NASA, explains the goals behind this new effort. "The website is a great resource for the general public and other stakeholders," Alleyne said. "It communicates the value of the International Space Station as a unique scientific and educational platform that enables discoveries that benefit all humanity."

The site will be featured on all of the partner agency websites, in both English and the applicable native languages. This includes the Canadian Space Agency, or CSA; the European Space Agency, or ESA; the Japan Aerospace Exploration Agency, or JAXA; the Russian Federal Space Agency, or Roscosmos; and NASA. The stories contributed were the work of writers from around the world, representing each of the agencies whose collaboration took the station from conception to reality.

"Working with the partners on this initiative was truly an extraordinary experience," Alleyne said. "This effort is a continued demonstration of the unprecedented achievement in international cooperation, which is one of the great values of the International Space Station."

Prompted by the International Space Station Multilateral Control Board, the site will feature stories that raise awareness to the station benefits already making a difference in our world. These accounts will be updated as additional accomplishments come to light and vary in topic from education to technology to telemedicine advancements.

"Users will find stories about station research that benefits humankind in the areas of human health, Earth observations and global education," Alleyne said. "Vaccine development research, station-generated images that assist in disaster relief and farming and educational projects that inspire future scientists, engineers and space explorers are some examples of research benefits. The resulting knowledge of these benefits will be extended to more countries and people for the betterment of humanity. They will be used to improve the quality of people's lives globally."

The site focuses primarily on findings that are making their way into general use here on Earth. For instance, doctors are already operating with space station robotics technology when they employ the neuroArm to perform delicate surgical procedures. There are also products with the potential for worldwide impact that are on the horizon, such as vaccines to inoculate against salmonella and even advanced delivery methods of microencapsulation for cancer treatments. These are just some of the developments derived from the work done aboard the space station highlighted as part of this humanitarian website.

As many efforts provide valuable conceptual and scientific data, however, researchers will continue to build upon the ever-growing body of space and microgravity knowledge. For results from specific investigations performed on the space station, readers can also visit NASA’s International Space Station Program Science Results Web page.